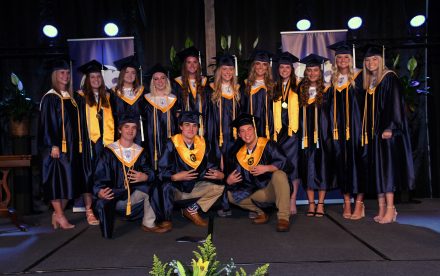 The Grace Christian Academy gymnasium was full of proud families Friday night, as the GCA Class of 2022 took the next big step in their lives with graduation.

After the opening procession, the families were welcomed by Johnson, with Williams providing the opening prayer. Hathcoat and Kearns led the crowd in the pledges. Barnett introduced this year’s salutatorian, Brooke Phillips.

“Congratulations guys, I can’t believe we’re actually here,” Phillips said to her fellow graduates in her salutatory address. “It’s been such a crazy ride, we are so lucky to be here in person.”

During her address, Phillips compared their journey through school to a Bildungsroman (that is, a coming of age story). “This word was taught to me in this very school, by the fabulous Mardi McRae in 9th grade literature class… I believe our time here at Grace has been just that.”

“My challenge for the Class of 2022,” Phillips said, “is that in whatever future endeavors we may have, that we always think back to our coming of age story, that we remember where we came from and the conflict that has made us who we are.”

After the salutatory address, executive director Cile Warr acknowledged the class Honor graduates, as well as those students that have attended Grace since pre-school, members of the National Honors Society, and students that were on the Honor curriculum track for all of high school. Warr then awarded medallions to those seniors that were able to maintain a 4.0 GPA through all of high school; those students were McRae, Phillips, and Warr. The class STAR Students were also acknowledged (the student with the highest SAT score at one testing period), and they were Phillips and McElyea, with both choosing Mandy Johnson as their STAR Teacher.

Administrator Joan Shiver spoke next, listing off which colleges the class plans to attend, in addition to some of the scholarships they have earned. After this recognition, McRae introduced the class valedictorian, Mary Glenn Warr.

“It is an honor to stand before you today as Grace Christian Academy’s Class of 2022 valedictorian,” Warr said. “To this special group of seniors sitting here in front of me, congratulations, we finally made it to this long-awaited moment.”

Warr praised the foundation Grace gave the students, before challenging her fellow graduates to “be ambitious toward your passions, and to own your decisions.” “These next few years are going to be full of choices… Graduating means we now have the ability to decide what we want our own future to look like, based on our own personal and unique passions. Having said this, I encourage you to genuinely challenge yourself, and be ambitious in the search for what you are passionate about.”

Next, Harrell introduced Maggie Bridges Kearney to deliver the evening’s graduation address. Kearney was named Miss Georgia 2014, competed in the Miss America pageant, and is currently studying as a medical student at Mercer University. While growing up, she attended church with and babysat several of the graduates. “I feel like I remember many of you when you were very, very small, and perhaps even held some of you as babies, so it’s incredible to see you guys up here tonight,” Kearney said. In her speech, she encouraged students to both accept that they would have failures, and to find something positive in their failures, recounting some of her own.

After her speech, the students were presented with their diplomas. A slideshow of class memories was played, followed by special music performed by Whitaker and Widner. Jenkins closed the ceremony with a prayer.

Congratulations to the GCA Class of 2022!