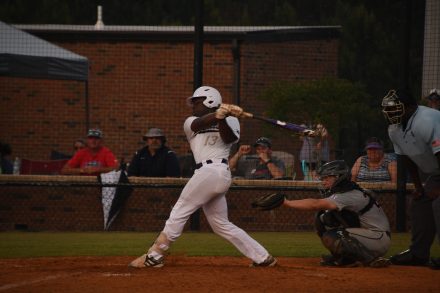 Josh Beachem takes a swing while at the plate.

With a delayed game to lightening, the Bearcats finally took to the field for the first game, where they fell behind early and couldn’t come back in a 9-1 loss.

Heritage opened up the game when they scored on a home run by Cannon Stafford in the first inning and a groundout by Gage Shaver in the 2nd inning.

The Bearcats struggled to contain Heritage’s high-powered offense, giving up nine runs and making multiple errors in the field.

Zach Barrett got the win for Heritage. He lasted six innings, allowing one hit and one run, while striking out six.

Despite the first game loss, the Bearcats played a nail biter in the second game, narrowly resulting in a 13-12 loss.

The Bearcats came back onto the field with a renewed enthusiasm, scoring six runs in the first inning.

Ryals Burch opened up the game singling on the first at bat.

Heritage’s pitcher then walked Bo Smith before Koby Wynn singled on a bunt.

With the Bearcats on the board, senior Cason Priest singled, scoring Wynn and Beachem, giving the Bearcats a hefty 4-0 lead.

With no outs, Bolton Yarbrough was walked. Drew Clayton then singled, scoring Cooper and Priest, allowing the Bearcats to take a comfortable 6-0 lead.

Heritage got two runs of their own in the bottom of the first inning, as Shaver tripled.

The Bearcats upped their score to 7-2 in the top of the second inning, when Beachem homered on a fly ball to center field.

A double in the bottom of the second inning caused Heritage to catch up with the Bearcats, leaving them trailing only 6-7.

The Bearcats knew they needed to add to their score. They scored an additional two runs in the top of the 3rd inning.

Heritage began the inning by walking Parker. Burch then singled, allowing Parker’s courtesy runner, Luke Griffin to score on an error by Heritage’s right fielder. Burch’s courtesy runner, Griffin Perkins then scored on a passed ball, while Wynn was up to bat.

Hertiage came right back, scoring another run in the bottom of the third, making the score 7-9.

Neither team scored again until the top of the sixth inning, when the Bearcats scored another run.

Wynn began the inning with a double. Cooper then singled.

Priest was up to bat when Heritage’s pitcher attempted a pickoff attempt at 3rd base, allowing Wynn to score on an error by the third baseman.

Heritage tied up the game in the bottom of the sixth, 10-10, after two players doubled, back to back.

The Bearcats regained the lead in the top of the 8th inning.

Wynn singled on the first play on the inning. Cooper then singled on a line drive before Priest tripled, scoring Cooper and Beachem, giving the Bearcats a 12-10 lead.

It all came down to the bottom of the eighth inning. Heritage tied up the game 12-12, when an error by Burch, allowed Heritage to get the final run of the night, ending in a 13-12 defeat. 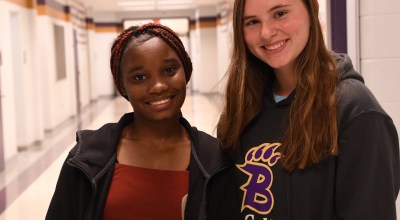 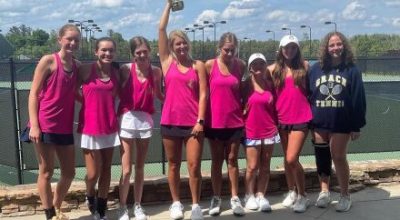 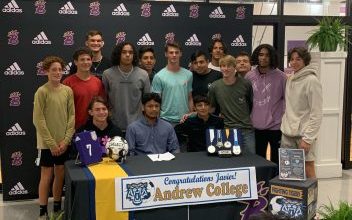