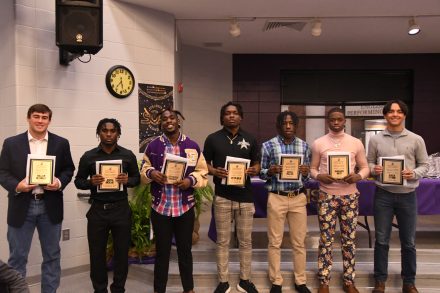 Monday night the Bainbridge Bearcats Football team gathered in the cafeteria for their year-end awards banquet.

Pastor Steve Brooks opened up the banquet with a word of prayer and spoke on the opportunities he had this past year to witness to the football team.

“The first opportunity I had to speak with the team this year was right after Dr. Roy Mathews’ passing,” Brooks said. “I called Coach Littleton and asked if I could speak to the team… I talked to the team that day and the word “excellence” came up every time we thought about Mr. Mathews and the legacy he left in the student body here at Bainbridge High School.”

Brooks then challenged the players to live their life with excellence, just as Mathews would have wanted.

Brooks then turned the microphone over to Touchdown Club President, Bert Hines.

“The 2021 football season was dedicated in memory of Principal Roy Mathews,” Hines said. “Roy loved everything about Bainbridge High School and the athletic program, but there was always a special place in his heart for the football program; you could hear Roy on Friday nights at Centennial Field in the top row up by the press box, cheering after every down for the Bearcats.”

To honor Mathews, Hines then invited up his family to present them with a plaque, commemorating Mathews being the #1 Bearcat fan and a constant supporter.

Head Coach Jeff Littleton echoed previous statements, saying Mathews was a great boss, mentor and friend and was dearly missed. He then thanked everyone who supports the Bearcats throughout the season and introduced the coaching staff, before moving onto the awards.

He began with the sub varsity awards.

The JV and Freshman Prime Players Awards were given to Travious Freeman, Javon Cox, Luke Griffin and TaShun Carter.

Aiden Velasquez and Matthew Spring were named the JV and Freshman Mr. Consistent.

The No Missed Opportunity JV and Freshman award winners were Bradley Marshburn and Ethan Castro.

Littleton then turned to the academic awards. Players in each grade level with the highest cumulative GPA were awarded. Matthew Springer, Bradley Marshburn, Jeb Logue and Octavius Green were the recipients.

Littleton then transitioned into the Bearcat Team Awards.

First up was the Hard Hat Award, given to players who go out of their way at practice and do so with a great work ethic.

Next was the Breakout Award, given to players who are primarily first year starters, who had played mostly JV last year, but performed at high levels.

The Iron Man was then presented to players who made a difference in all three phases of the game: offense, defense and special teams.

Following that award, Littleton presented the Tommy Smith Hustle Award. The award is given to a player who demonstrated the same qualities of character, leadership, academic achievement and hustle that Thomas Livingston, Jr. demonstrated.

This year’s winner was Octavius Green.

Finally, the Bearcat awards were given to players, who consistently and proudly exemplified the Bearcat Core values.

Awards were followed by football certificates for the freshman, sophomore, junior and senior class.

The awards banquet concluded with a new record set by the seniors, who won 36 games over their 4 years and played in 13 playoff games.