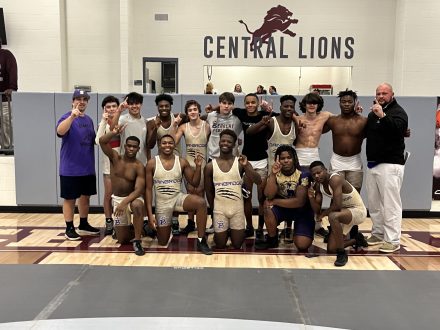 The Wrestling Cats hold up a #1 after winning against the Islands High School Sharks and Central Carrolton in order to advance to the Elite 8.

The Bearcat Wrestling team has been hard at work all month long, wrestling region opponents and preparing for post-region meets. On Saturday afternoon, all of their hard work paid off when they became the first wrestling team in Bainbridge High School history to advance to the Elite 8.

According to head coach, Chad Smith the team went into the meet second in region.

“We were second behind Thomasville,” he said. “We lost due to the fact we didn’t have people in two weight classes.”

Because the team placed second in region, they were forced to travel to Carrolton, where they would advance, based on their wins.

“We felt pretty good going into the meet,” Smith said. “We knew we could’ve been first in region had it not been for the weight classes. We did some research and really studied up on who our opponents would be.”

Headed into the meet, some of the JV wrestlers stepped up, due to Varsity wrestlers being out.

“Alex Pearson filled in for us in the 160 lbs. weight category, as our best wrestler, Hunter Harris was out,” Smith said. “Alex got a big win for us at region, when we were down big and then turned around and did the same thing for us at Central Carrolton.”

Smith explained that in order to get points for wrestling, athletes want to pin one another. However, there are other ways to get points as well.

“We explained to them, if we lost, we want them to lose by points and not by being pinned,” Smith said.

Pearson shocked Smith, though, when he pinned an opponent at Central Carrolton that was unexpected.

“He was a real trendsetter and changed the way things were looking at the meet,” Smith said.

Another JV wrestler, Brian Pugh, who had been back and forth between JV and Varsity then stepped up to the mat.

“Brian has been back and forth from JV to Varsity, filling in for us when needed,” Smith explained. “He got a win for us at region and then turned around and got another win at Central Carrolton.”

The best surprise of the meet came when Kagan Castro hit the mat in the 145 lbs. weight category.

“He pinned Central Carrolton’s best wrestler in the 1st period,” Smith said excitedly. “But, they all did really good.”

Now, for the first time in 23 years, the Bearcats are headed to the Elite 8.

The team will travel to LaGrange on Saturday for State Duals, where Smith expects they will compete against Jefferson.

“We know what we are going into,” he said. “It’ll be a tough matchup, but our team likes a fight and we don’t give up.”

Smith is excited to see how far the team will go this season. If they win in LaGrange, they will then compete at Sectionals on Saturday, February 5 in Dalanagha, Ga.