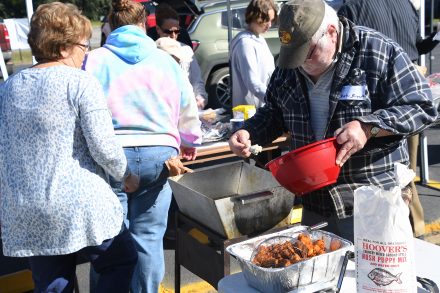 Volunteers fry up hush puppies, French fries and fish as part of a fundraiser for the Donalsonville Alpha Pregnancy Center.

Cars lined up the parking lot of Donalsonville’s Alpha Pregnancy Center on Thursday around noon, waiting to pick up their orders. The menu? Fried fish, French fries and hush puppies. After months being closed, the center re-opened its doors last week. With the things returning to normal, the center decided to host its first fish fry as a fundraiser.

“This is kind of a reopening month,” outreach coordinator Kim Bell told the Post-Searchlight. “We’ve been down since August I believe, just because of staffing issues, and just some personal family issues with some of the current staff… so we’ve been closed for a few months. They did some work to the building, did some cleaning, some renovation, did some things outside sprucing up the place… several upgrades were made to prepare.”

The Donalsonville Alpha Pregnancy Center is just one of three satellite centers, an offshoot from the main center in Albany. According to Bell, a fourth center in Camilla is planned to open this spring. Alpha Pregnancy Center is a non-profit that provides proof of pregnancy and counseling for, in Bell’s words, “young ladies who find themselves in a situation where, they’re scared or confused and may not know what to do, or may not be able to afford healthcare.”

Services offered include pregnancy testing, ultrasounds, education for mothers considering abortion or adoption, as well as parenting classes, in addition to an “Earn While You Learn” program, which provides participating parents with “credits” for completing lessons, which they can use to “purchase” necessities like diapers from the center.

“Our goal is to save lives before they’re born,” Rev. Tim VanLandingham told the Post Searchlight, “We want to help those young parents know how to care for that child spiritually, as well as physically.”

According to VanLandingham, 205 plates were served, and approximately $1,300 was raised, not adjusting fro expenses.