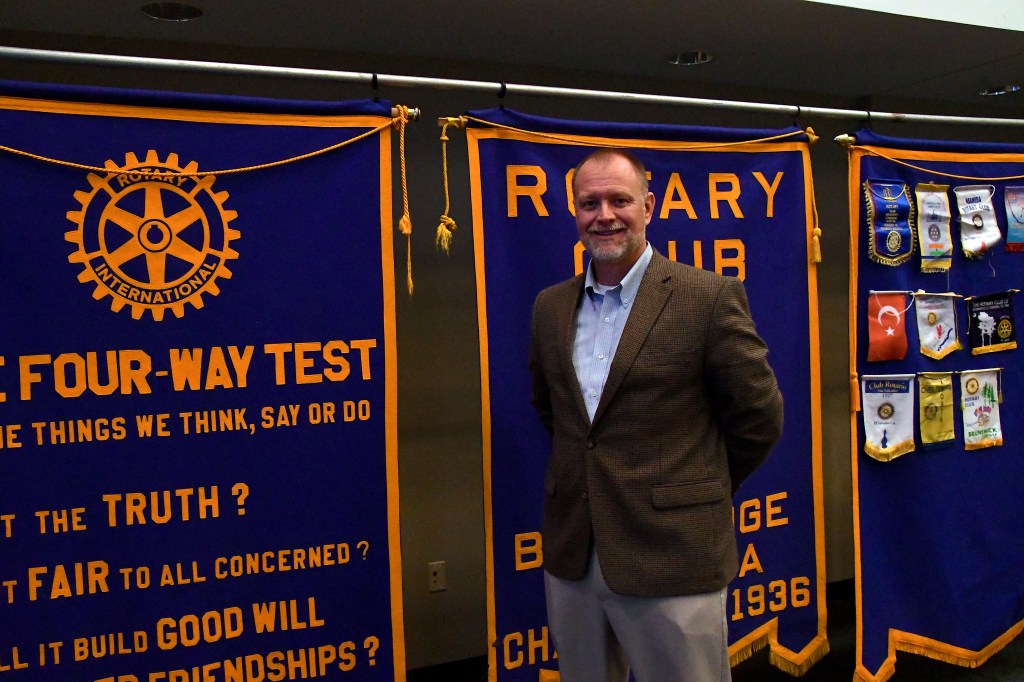 Superintendent Tim Cochran spoke at the Rotary meeting this Tuesday, giving an update on Decatur County schools so far.

The Bainbridge Rotary Club met at the Kirbo Center Tuesday for their weekly meeting. This week’s speaker was Superintendent Tim Cochran, who gave an update on Decatur County schools so far.

First on the agenda was enrollment, which has seen a 2.4% decline since last year, and a 20.8% overall decline since 2010. According to Cochran, Spring Creek Charter Academy accounted for part of that drop, as well as a decline in local birth rate, though he projected a leveling out of this decline in 3-6 years.

Cochran also showed reduction in staff that coincided with the decline in enrollment, “Because I want people to know that if you’re paying taxes, we’re being responsible with your tax money,” he said.

Other things discussed included the graduation rate, which is currently 95%, higher than the district and state rate.

“Bainbridge High School is 11% over the state average, and that’s something to be very proud of,” Cochran said.

“We’ve been able to do that due to the growth we’ve had in our community, we’ve used the rollback rates, so that has helped us with that,” he continued. “I will tell you now, we’re almost to a point in the milling where we can’t lower it anymore, because there’s a component to our funding called equalization. Equalization is a process where districts that are low wealth, are lower than 50th percentile in the State of Georgia, receive additional funds.”

According to Cochran, lowering the milling any further could cause the school to lose $2.1 million in state funding.

Also discussed was the effect COVID had on the schools last year, with masks not mandatory, though a masked person exposed to COVID does not have to quarantine.

The school mergers were discussed with Cochran listing figures of current enrollment compared to the school’s all-time highs in the past. Cochran also discussed how the school is offering tours of local industry (Danimer, A1, Taurus, Steward Machine Co., etc.), as well as job placement interviews.

Lastly, the new middle school was previewed, with groundbreaking scheduled for April of this year, expected completion by May of 2024, and actually moving in by the 2024-2025 school year.