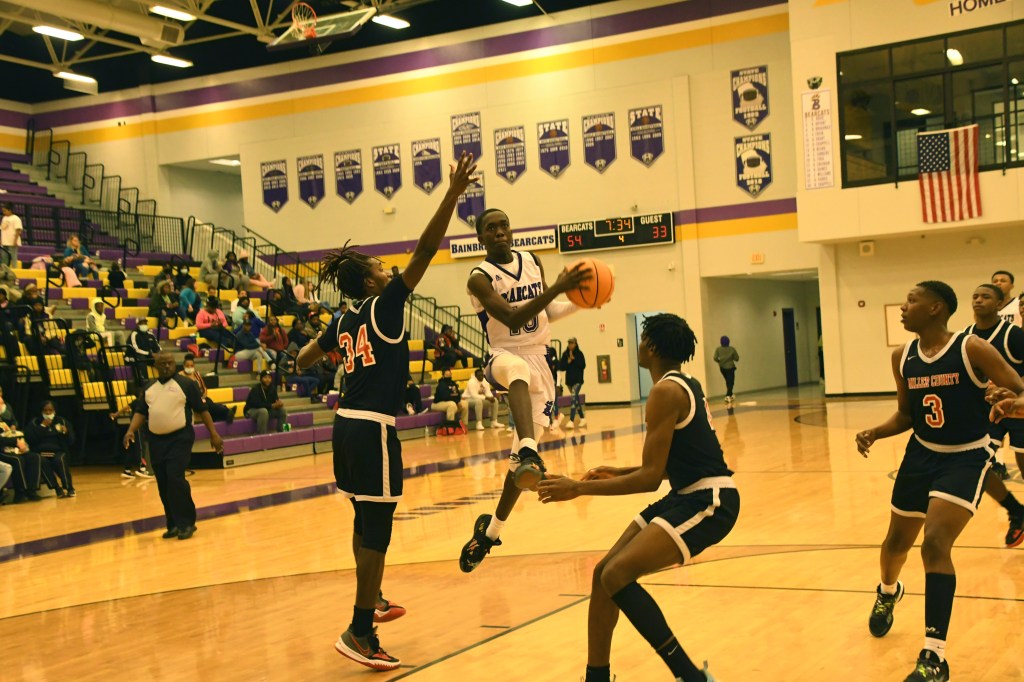 AJ Grant makes a lunge for the net. Miller County made a failed comeback attempt in the fourth quarter.

The BHS Varsity Boys had a tight victory over Miller County last Tuesday night, winning 66 to 51.

The boys had a good first quarter, scoring 14 points to Miller’s 7. VJ Ervin and KJ Cochran both led the team, scoring 5 points apiece.

During the second quarter, the boys scored 19 points. Cochran had the highest score, with 7 points, with Ervin following behind with 5 points.

The Miller County boys were close behind with 12 points.

After halftime, the boys came back with their best quarter, scoring 22 points. Ervin again led the way, scoring 7 points.

Miller only scored half of the boy’s total, only 11 points.

During the final quarter, Miller made a comeback, scoring 21 points to the BHS boy’s 12. This still wasn’t enough to overcome the Bearcat’s lead.

Cochran and Parris both scored 4 points, while Gaines scored 2.

“We tried to press at the very beginning,” Coach Jeff Page told the Post Searchlight. “We got some steals, but we still need to work, in a game like this you try to work on stuff, because we’re gonna need it eventually.”

He praised the boys, saying, “I thought the kids played well. The first group played good tonight.” He continued, “The second group, you don’t like in a game like that, that you had some drop off, but they’re a second group for a reason. I thought they played well… KJ had a heck of a game on the boards. So far this season, you don’t know who it’s gonna be every night, it’s a different person every night. So I was proud of them.”

The boys went on to play Valdosta this past Monday night in the Colquitt County Christmas tournament, winning 48-36. Broadnax scored 11 points, while Grant and Dialan Beard both scored 10 points.