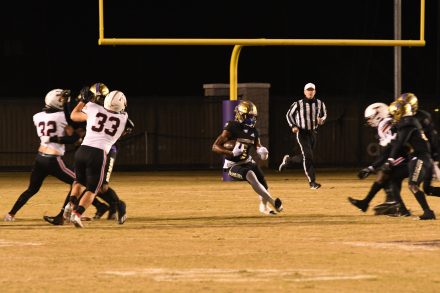 Smoke Bouie finds an opening and runs it back for a 91-yard kick return early in the first quarter.

The Bearcats ended their playoff run on Friday night in a hard fought battle against the North Oconee Titans. While the Bearcats had some bright moments, they ultimately had too many penalties, costing them the win, 29-24.

The Titans came out strong in the first quarter, scoring early on.

Khalil Barnes made a 76-yard run in the second play of the game with 11:14 still left in the half. Max Wilson then ran for the two-point conversion, giving the Titans an 8-0 lead.

The Bearcats were only down for a second before Deyon “Smoke” Bouie had a 91-yard kick return with 11:10 left in the quarter.

Blake Fagan made the extra point, leaving the Bearcats only down one point, 8-7.

Less than a minute later, North Oconee’s Dominic Elder made a 9-yard run with 10:05 left. J.J. Poole then made the extra point, giving the Titans 15-7 lead.

Neither team scored for the remainder of the first quarter.

Nick Tyre then made the extra point, leaving the Bearcats once again trailing by only one point, 14-15.

The Bearcats held off the Titans all throughout the second quarter, and came out ready to win in the second half.

The Titans refused to stay down.

Max Wilson then made a 35-yard run with only 1:03 remaining in the quarter.

Poole made the extra point, returning the lead back to the Titans.

It all came down to the fourth quarter.

North Oconee’s Barnes caught a 23-yard touchdown pass from Louden Schnake with 8:53 left in the quarter. Poole made the extra point.

Now down two touchdowns, the Bearcats turned it around again.

With 6:29 left in the game, Antavious Murphy caught a 31-yard touchdown pass from Bo Smith.
Fagan made the extra point.

This was the final touchdown of the night, leaving the Bearcats just a few points short of a win.

Head Coach Jeff Littleton admitted the team made a few too many mistakes to beat a hardnosed, disciplined team like North Oconee.

“I’ve got to give them credit,” Littleton said. “They did some things to put their guys in a position, and their guys made the plays.”

However, Littleton was also proud of his team and the fact the Bearcats came back from a two-touchdown deficit and played hard all the way through until the end.

With the season coming to an end, Littleton reflected on what he thought overall.

“I’m proud of the fact we got better throughout the season,” Littleton said. “I’m real proud of the seniors and all the players who challenged themselves to get better every day, and they did.”

Individual highlights for the game included Phillips having 13 carries for 101 yards, Smith completing 10 passes for 117 yards and Murphy having three receptions for 64 yards and a touchdown.