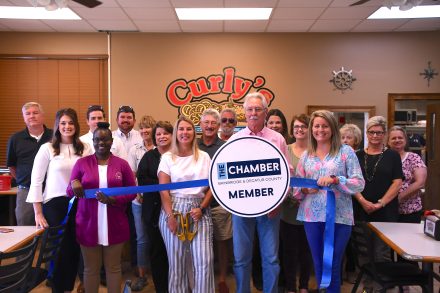 New businesses continue to pop up as Bainbridge grows and expands. One of these new businesses is Curly’s On the Flint, a walk-in restaurant at the Bainbridge Marina. According to city manager Chris Hobby, the restaurant had sat unused and vacant for five or six years, before the city was approached with an offer to lease earlier this year. Members of the Chamber of Commerce and community gathered this past Wednesday for the restaurant’s ribbon cutting.

Co-owners Michael Long and Mona Vester both briefly spoke at the ceremony. “We’re very, very excited about the opportunity here,” Long said. “It’s been a long time getting this all together… What excited me about it was not only the river, but the industrial park.”

Long currently operates several Mama Goldberg’s Delis in Alabama, and had previously run a chain of restaurants in Oklahoma City called Curly’s Old-Fashioned Hamburgers, with Curly’s On the Flint being a small revival of that.

He further elaborated on the location choice, saying, “The river is a big deal to the city. My thought process was, I wanted that to kind of be icing on the cake when it’s there, because I don’t think any restaurant can survive in this location depending strictly on the river, because it’s seasonal.”

He explained he wanted to have a restaurant near the industrial park to offer quick food to workers, “The guys just across the street, there’s 50 guys over there. They get 30 minutes off for lunch. So they can walk right across the street, or call in and pick up their food.”

Curly’s can currently be found on DoorDash, and according to Long, they may also offer their gazebo for special events.