A Tribute to the Queen of Southern Soul Food, Miss Betty Jean Brock 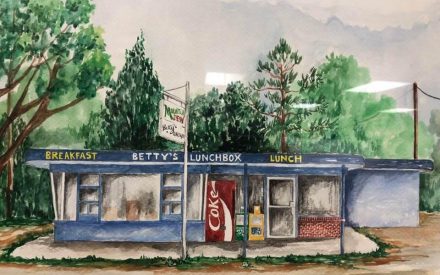 Above, a watercolor by Cathy Cox of the original Betty’s Lunchbox.

Betty’s Cafeteria has a long history of serving quality, home-cooked Southern meals and making customers feel at home. Much of this is due to the hard work and caring nature of its founder, Miss Betty Brock, who passed away on Thursday, September 2, 2021.

Brock’s children are now preserving her memory by carrying on the family business and making sure everyone knows the legacy of “Miss Betty.”

Betty first opened Betty’s Lunchbox in 1980 at the age of 44. The restaurant sat 12 customers and Betty did it all. She cooked the meal, served it and sold it.

After growing out of her original restaurant, Betty moved her location to the old Dairy King in 1983, which then sat 35 customers. She finally opened Betty’s Cafeteria at its current location in 1988, which would seat up to 100 customers, including many of the students at the old West Bainbridge Middle School.

Betty’s daughter, Bobbie Davis said her mother always wanted to own a restaurant.
Prior to her opening Betty’s, she had worked in the deli at Henderson’s Grocery and cooked most of the meals for her four children, Bobbie, Mike, Wayne and Lois.

“From there, she opened up her own place,” Davis said. “She did everything by herself; she was a hard worker and was determined to press forward.”

Betty wasn’t by herself for long, though. She soon started bringing Mike, who was then in high school, to work with her before school began.

Mike would often come back to the restaurant after school ended, where his sisters would be taking turns working as well.

Mike wasn’t the only school boy who loved coming to Betty’s. His family described a time when all the students from the old West Bainbridge Middle School would come in the morning after their parents dropped them off to get breakfast.

Davis said if the children didn’t have the correct amount of change, her mother would let them have the food and just write their name on the wall for next time.

Being that motherly figure, Miss Betty also felt the need to call the school the day she caught some kids skipping and playing basketball in the neighborhood behind her restaurant.

“She called the principal and said you might want to come get some of these boys they are playing basketball,” Mike said.

Davis chimed in that one of the boys skipping happened to be her grandson, but Miss Betty didn’t play favorites; she loved everyone equally, especially the members of her church.

Miss Betty was a charter member of Trinity Baptist Church.

Before the church got its permanent residence, Miss Betty opened up her business for the congregation to meet.

“When the church was formed, they didn’t have anywhere to meet so she convinced them to meet here,” Mike said. “She had the building and she was just delighted to have them.”

The church wasn’t the only group to meet at Betty’s.

At a long table in the back, all walks of life gather together almost every morning to unofficially solve the world’s problems.

“All the world’s problems have been solved over there,” Bobbie said.

The group became so tight-knit and familiar to Mike, he said they began putting black ribbons on the chairs when one of the group members would pass, but over the years, the group always was rebuilding and it became harder to keep up.

The group was always well-fed, usually by Miss Betty’s famous “Betty Burger,” which consisted of ham, egg and cheese on a toasted bun.

It became such a popular request that it was eventually named after Miss Betty, who combined the ingredients.

Her passion for people and serving didn’t go unnoticed.

While Miss Betty was thankful for her achievements, she remained humble and told others to “walk by faith and not by sight.”

Her children said she would only pray to the Lord and ask for what she needed, and never anything more.

She passed on her motto to Mike, when he took over the business and promised him that God would provide.

As Miss Betty grew older, she developed dementia, but her children said that never stopped her from remembering the restaurant, as she would often ask about it. If she wasn’t asking about it, she was requesting food from Betty’s for her and the nurses. They claimed Miss Betty had eyes and ears everywhere.

Her family is thankful for all the years of memories they had with her at the restaurant and closed by saying her famous phrase, “we will work it out.”