A Successful Youth Rally For Christ “Say No To Drugs, Violence and Gangs” 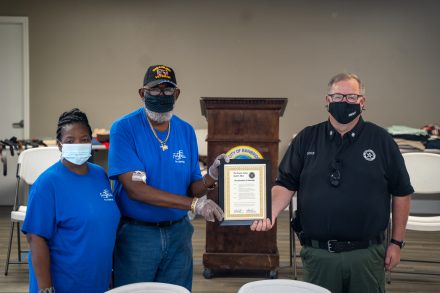 Chief Deputy Wendell Cofer presented the Bivins with a Proclamation of Gratitude from Sheriff Wiley Griffin for their help with the youth.

The Laymen Brotherhood Second Chance Outreach Center, Inc. had a successful “Say No to Drugs, Violence, & Gangs Youth Rally for Christ” on Saturday, August 21, 2021 held at the Joe L. Sweet, Jr. Community. Everyone who attended had to wear a mask and keep socially distance and the seating was only limited to 50 people due to the Coronavirus. The organization gave out book bags, Bibles, belts, clothes, shoes, and literature on “Stop the Violence” and “Let’s all work to Fight Drug Abuse” donated by Bainbridge Public Safety.

Special guest, Mr. Wendell Cofer, Chief Deputy of the Decatur County Sheriff’s Office gave an inspiring speech on one of the most powerful words is “thank you” and presented Rev. Adren & Mrs. Sylvia Bivins with a Proclamation of Gratitude from Sheriff Wiley Griffin and a monetary donation to assist with the pizzas and soft drinks.

Also in attendance was Attorney Mr. Paul Fryer, a representative of Congressman Sanford Bishop, Jr’s office, who gave a monetary donation to assist with the rally.
The founder, Rev. Adren Bivins, opened with a prayer and greetings to everyone and thanked them for attending. He gave a motivational speech to the youth. He told them where he came from and that he came up during segregation and he did not have the luxuries that they have for school today. He had to walk two miles to school and two miles back. He told them his father, the late Abraham Bivins, died when he was only nine years old and had to pick strawberries and oranges in his hometown of Plant City, Florida. He told them that the section of town he lived in was called Dark Town, because there was only one light on the entire side of town. He bought his school clothes and helped his two younger brothers, the late Daniel and Abraham, Jr. He said to them that if he made it by finishing high school in 1968, worked five years to help his family, received a football scholarship to Prairie View University in Houston, TX at the age of 25 and later transferred to Florida A & M University in Tallahassee, FL, on the amateur wrestling team and made all American heavy weight champion, they can make it too.

Rev. Bivins further told them how he was a policeman in Florida, was shot in the stomach and almost died, but God saved his life for the work he is doing now helping youth. His dream at the age of 6 years old of becoming a professional wrestler became a reality with God’s help. He wrestled worldwide as Butcher Ali-Pasha the original Black Assassin 6’ 7” tall and 350 pounds. Two years ago, he was inducted into the Professional Wrestling Hall of Fame and retired as the African & Southern heavy weight champion undefeated.

Also in attendance were Mrs. Barbara Whigham Eustasy, Ms. Annette Moore, Retired Army Veteran, Mr. Alfi Jefferson and Deacon Emory Brown, Jr., former Laymen President of the First Flint River M. B. Association and retired Army Vietnam veteran. Deacon Brown gave another motivational speech on how to deal with loved ones on drugs. He also gave history lesson on the Tuskegee Airmen and the Red Tails. He gave each youth a valuable silver coin and told them that they can be anything that they want to be and encouraged them to put God first and to study their lesson.

The Laymen Brotherhood Second Chance Outreach ministry wants to thank everyone for their love shown through prayers, financial contributions, donated items, and participation to help the 2021 Youth Rally be a great success to serve our youth of Decatur County. All youth and parents in attendance were very grateful to receive the many acts of love and kindness shown to them by all who donated.

Afterward, Rev Bivins and his wife went to the Projects on Martin Luther King, Jr. Drive and fed them pizzas, soft drinks, water and gave out more book bags, and Bibles until everything ran out. A special thank you to Mr. Scott Beigle and his wife Brenda, the staff and listeners of Faith Radio for what they do to help each year. Also, Mr. Lenorris Clary and Chrystal King of the radio stations as well as the Bainbridge Post Searchlight. A thank you to all the businesses, churches, and personal donations. The Bivins are member of Salem M. B. Church and the pastor is Rev. Frank Deyounks. Rev. Adren Bivins: The Laymen Brotherhood Second Chance Outreach, P O Box 7939 Bainbridge, Georgia 39818 (229) 254-7606.