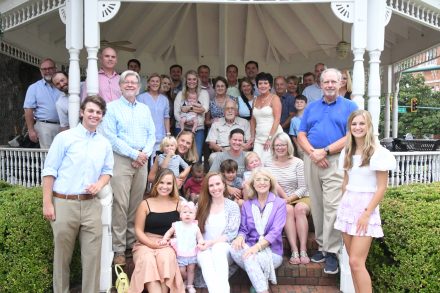 The Willis family gathered in Willis Park an hour prior to the Willis Park Hotel grand opening on Thursday night for a small reunion, before owner Tyler Thomas took the family on a private tour to celebrate their heritage.

The park, which was named after Elisha James Willis II, has been a large part of the Willis family’s lives for generations, and they felt it was the perfect place to gather prior to the hotel’s opening.

Present for the family reunion was patriarch and direct descendant of Elisha Willis II, his grandson, Ellison Richards Willis and wife Virginia.

Ward said the opportunity to gather and be a part of this hotel grand opening were really special to her dad.

“It’s been over 10 years since he’s seen everyone together,” Ward said. “We used to do family reunions, but we haven’t been able to gather as of lately; it’s just been harder to get everyone together.”

Ward said the gathering reminded her father of old times, and allowed she and her brothers to see their cousins and children, who would be the next generation to carry on the family name.

After a few moments of hugs and handshaking, some family history was shared.

Elisha James Willis II was the Bainbridge Mayor from 1904-1908 and was said to have fought a fire overnight in the town square. Due to these brave actions, Willis Park was then named after him and he received a silver water pitcher and goblets from the City.

Following some short storytelling, the family gathered for a photo, before Thomas took the family on a tour.

Thomas’ wife, Heather shared how special she thought it was that the family was able to be a part of their opening night.

“I think that’s so special,” she said. “One thing that drew us to Bainbridge was the sense of history, community and place that was here,” she said. “You can go live somewhere else and never know the history of the property, but in Bainbridge we got to meet the descendants of Willis Park.”

To thank Tyler and Heather for their hospitality, the Willis family presented Tyler with an original picture of Elisha James Willis II to be framed and used in the hotel.

Ward said her dad was unable to make it all the way over to the hotel, but did sit in his chair below while the family explored and was able to see a lot of familiar faces from over the years.

“He was holding court in the square, just like in the olden days,” she said happily.

The family is thankful for the chance to be brought together again and appreciate the Thomas’ for using their last name and carrying on the history of the Willis family.