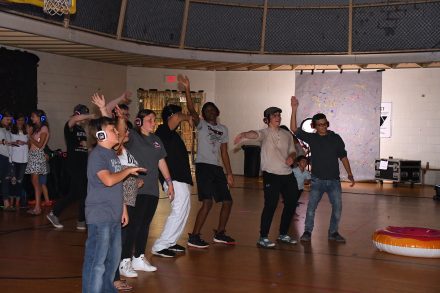 Youth kids wave their hands in the air and dance along to music on their headphones at the silent disco.

Wednesday night saw dozens of kids and teens at the YMCA, gathering on the basketball court for a night of music and fellowship with Southwest Baptist Church. The church and Y hosted a silent disco, which involves, colorful lights, a DJ and a soundboard, but with a twist: there are several channels of queued music to choose from, all played through headphones. Instead of blaring music through speakers, the gym was much more quiet, with attendees able to pick and choose the tunes they wanted to dance to.

According to youth pastor Corey McMickle, the event was intended to be non-denominational.

“Right now it’s catered toward winning over the kids, and letting them buy into this, we can do things across denominations, it is ok for Baptists to rub shoulders with Methodists,’” he said. “It (the program) talks about how Christ has one body, and it doesn’t make sense that Southwest is the hands or the feet, and Grace is the legs, and they never cohesively do anything together.”

The night’s message came from Revelations 2.

The DJs for the night were JW Jaegar and Vitor Andrade, who not only do weddings and events, but JW has worked for Duck Dynasty and Florida Georgia Line, and both have worked for Disney.

“We have a new worship pastor who’s been there with us for almost a year now, and he lived in Orlando and he actually used to be part of a big band called Go Radio and Mayday Parade, and so through him I was able to pull connections that way,” McMickle said.

JW is also a drummer with Global Missions Project.

“People buy into the mission, you know?”  McMickle said both DJs were excited for the opportunity to work with a variety of denominations and introduce them to a new way to worship through song.

McMickle estimates around 70-75 kids turned out for the event.

“I was extremely pleased with it, because you have to understand, a lot of it is tailored toward bringing youth groups together… my youth group runs anywhere from 30 to 50 kids … and so to have anywhere from 70, 80 to 90 kids is great,” McMickle said.

McMickle also believes these one ministry events introduce youth, who are facing similar issues and daily pressures to one another.

“I believe every one of them is a success, because blessings don’t always come to your immediate ministry,” he said.

The next youth event scheduled by the church is scheduled for next month, a water day on Lake Seminole, complete with tubing and an inflatable water blob.