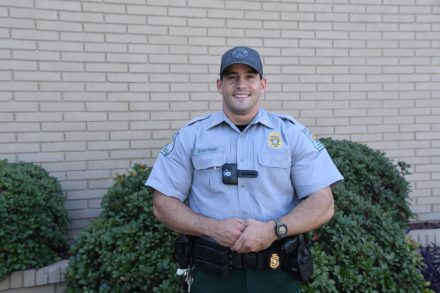 The Command Staff is pleased to announce that Game Warden Keith Boatright of Region V Law Enforcement has been selected to receive the Rocky Wainwright Waterfowl Award.

The Rocky Wainwright Waterfowl Award is designed to recognize the individual who selflessly gives and devotes their all towards waterfowl enforcement, as well as inspires other game wardens to perform at their best.

Game Warden Boatright began his career with the DNR Law Enforcement Division on January 1, 2020 and completed his FTO Program November 1, 2020. Throughout the year, he has shown a great interest in working duck hunting on Lake Seminole and the numerous ponds and swamps in his area of assignment. During this waterfowl season, Game Warden Boatright checked 217 waterfowl hunters, dedicated over 50 hours conducting 16 vessel patrols for waterfowl activity and checked 17 duck ponds within his work section. This season, Game Warden Boatright documented 53 quality waterfowl violations (47 citations, 6 warnings) and had 14 violation assists with other officers. His violation activity consisted of 21 contacts for hunting ducks over bait, 4 non-residents hunting without a license, 18 contacts for hunting without a Federal Duck Stamp, and 10 contacts for hunting without a Georgia Migratory Bird License. Out of his 53 contacts, 26 were documented on private land and 27 contacts were made on the public waters of Lake Seminole, Lake Seminole WMA, and Silver Lake WMA. A few highlights of Game Warden Boatright’s waterfowl patrols include locating 5 baited ponds, which resulted in 28 adults being cited and verbal guidance given to seven juveniles, one BUI, and 4 subjects charged for killing an alligator without a permit. Game Warden Boatright confiscated nearly 70 ducks of various species during his patrols.

Every year, duck hunters from numerous states visit Lake Seminole to hunt Canvasbacks. Game Warden Boatright learned early in his career to focus on the more serious issues concerning boating safety and conservation law enforcement. He is also keenly aware of the importance of balancing enforcement with education. Keeping this in mind, he routinely gives verbal guidance to novice and juvenile hunters for minor infractions to help educate, develop, and promote waterfowl hunting. Game Warden Boatright has made a conscientious effort to meet his local waterfowl guides on Lake Seminole and makes sure they have his phone number. This has resulted in a mutually beneficial flow of information between the guide services and our work unit. This not only provides for a better hunting experience for customers, but it also provides a wealth of information on both lawful and unlawful hunting activities in our area.

On September 12, 2020, Game Warden Boatright was patrolling on Lake Seminole during the early Teal season. While pulling his patrol boat up to check some duck hunters, he noticed a lot of unnecessary movement in their boat. While talking with the group of hunters, he was aware that they became extremely nervous and were being very vague with their answers. During his inspection, he asked the group why they were so nervous and asked if they were hiding anything in their vessel. Game Warden Boatright noticed a large amount of blood in the bottom of their vessel and asked for permission to board. While on board, he asked the group about the blood in the bottom of the vessel, and they advised it was from the three Teal they had killed. Game Warden Boatright advised them that there was no way that much blood came from 3 ducks and asked them again what they had killed. After denying they killed anything else, he took the paddle out of his patrol boat and began looking in the sawgrass. While searching the sawgrass, he located a 6-foot alligator carcass with the tail removed. The four duck hunters were issued 20 citations for hunting ducks without licenses and killing an alligator without a permit.

On December 24, at approximately 10:00 a.m., Game Warden Boatright received a call from Seminole County in reference to an SOS signal they had received from a personal locator beacon in the middle of Lake Seminole. Without hesitation, he called his supervisor for assistance, then launched his patrol vessel into the high winds and pouring rain. He dialed in the GPS coordinates of the distress signal, where he located a duck hunter in eight feet of water, clinging to the bow of his submerged vessel. The hunter, who was not wearing a PFD, could barely move or talk when the officers arrived on scene. Game Warden Boatright immediately pulled the hunter aboard the patrol vessel and requested an ambulance to meet them at the nearest landing. On the way to the landing, he removed the hunter’s waterlogged chest waders, shirt, and jacket and gave him his raincoat and an emergency blanket to wear. During this time, the hunter shook uncontrollably and mumbled to Game Warden Boatright, “Thank you for saving my life.” After being checked out by emergency personnel, the hunter informed him that his decoy lines became entangled in the prop of his motor, causing the motor to shut off. While trying to untangle the lines, waves began coming over his 18-foot boat, causing it to swamp and sink. The hunter stated he activated his locator beacon just before the vessel sank. As a waterfowl hunter himself, Game Warden Boatright understands that bad weather conditions will not keep many duck hunters off the lake. His willingness to weather the extreme conditions of freezing rain, wind, and high waves to respond to an unknown “emergency” shows his dedication to the safety of the citizens of Georgia, along with the waterfowl hunting community. Game Warden Boatright gained a lot of positive notoriety with many waterfowl hunters and residents around Lake Seminole after this rescue on Christmas Eve.

Game Warden Boatright’s passion and dedication towards waterfowl enforcement is a testament to the pride he takes in his profession. His passion for the conservation of waterfowl and our local ecosystems extends beyond his role as a game warden. It has enabled him to become an advocate and ambassador, not only for DNR, but for the waterfowl hunting community as well. He is totally committed to the Law Enforcement Division and the citizens of Georgia. Game Warden Boatright strives for excellence every day and he takes pride in serving his community. In his short time since becoming a game warden, he has earned the respect of his work unit and the community he serves.