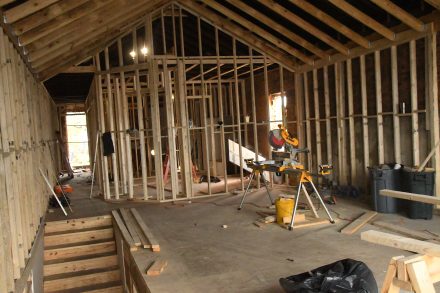 Construction continues at the future home of Keller Williams Realty.

When Hunter Bulger left to live in Tallahassee in 2018, he had a goal in mind: to gain experience to bring back to Bainbridge. Having become a licensed realtor in 2016, once in Tallahassee, he began looking for a company that offered licensing in both states. He eventually found Keller Williams, and in January of this year, he became their broker for Southwest Georgia, in addition to being licensed in Florida.

“This is my home town. After moving away to Tallahassee for two years, I just wanted to bring that experience back to Bainbridge,” Bulger told the Post Searchlight in an interview.

He has since begun moving into a new office downtown on South Broad Street, between City Hall and Isaac’s Bakery. Construction is still on-going, and when complete, it will not only be a Keller Williams office, but will have a two bedroom, two-bathroom apartment upstairs. Bulger hopes to have it complete by the first of June.

With all the new business companies like Taurus have brought to Bainbridge, Bulger weighed in on the current state of the real estate market. “The market in general is absolutely in fire. Things have been selling higher than ever. If there was ever a time to sell, now would be it.”

Locating his office downtown was also purposeful move Bulger made with businesses and markets in mind, as he hoped to help revitalize downtown Bainbridge. “I’m just looking forward to returning home and serving my community, and representing my family well, and representing Christ well.”