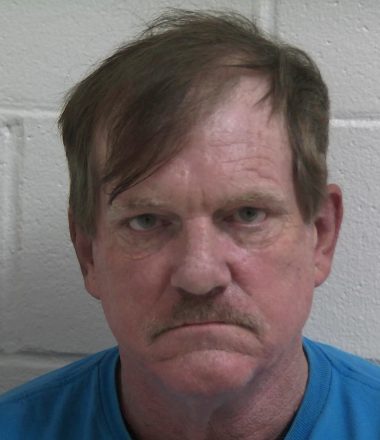 On Monday, February 1, 2021,Decatur County Sheriff’s Office Investigator Adam Mobley received information that Charles Swaim (AKA Chuck) had an ounce of Methamphetamine inside a black magnetic box and was located at the Decatur County courthouse parking lot. The informant stated a drug deal had just happened in the parking lot.

Mobley responded to the area and began conducting surveillance on Swaim. Swaim then traveled to a business on Calhoun Street where Mobley and Investigator Justin Kelly witnessed what appeared to be a hand-to-hand transaction with an unidentified individual driving a van. Swaim then walked to the driver’s side rear tire and reached under and placed a black magnetic box under the fender of the truck bed. Mobley knew through his training and experience that drug dealers are known to put their drugs in magnetic boxes and place them under the vehicle while driving, in an effort not to be caught by Law Enforcement if stopped and searched. Mobley continued surveillance as he waited on additional units to get in the area. Swaim then headed north on Colquitt Hwy and at approximately 2:38 p.m., Mobley performed a vehicle stop on the red 2001 Ford F-150 near the 1200 block of Colquitt Highway.

Mobley made contact with the driver and asked to see his driver’s license to which Swaim replied he did not have one. Mobley requested Swaim exit the vehicle and asked Swaim if he had anything illegal in the vehicle. Swaim replied not that he was aware of. Mobley then informed Swaim that he had information that Swaim was selling Meth and that Mobley had been conducting surveillance on him and saw the hand-to-hand transaction and him place the magnetic box under the truck. Swaim then stated he did not personally have anything. Mobley then informed Investigator Gabe Cofer to detain Swaim. Mobley then walked to the driver’s side rear tire fender and reached under and immediately pulled out a black magnetic box. Mobley opened the box and it contained 2 clear plastic bags, both of which containing suspected Methamphetamine. Swaim was transported to the Decatur County Jail and charged with Possession of Methamphetamine with Intent to Distribute and Driving without a License.

Maxwell twins, Brayden and Tyler, 9, have always helped their neighbor with the lawn. Now, they are hoping to help... read more