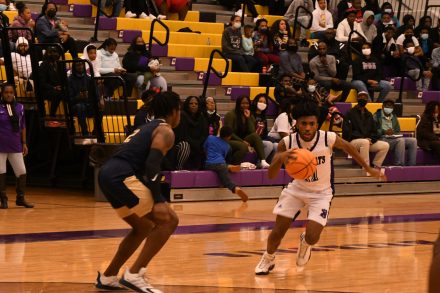 Dylun Worlds takes the ball down court on Friday night after his senior recognition early in the evening.

Following a forfeiture from Monroe on Tuesday, the Bearcats took on their first region opponent TCC at home Friday, where they won 70-47 on Senior Night.

Dialan Beard followed Cooper’s lead, scoring six points with three layups of his own. Lathan Levens finished up the first quarter for the Cats with four points, making two layups and giving the Bearcats a 19-10 lead against the Yellowjackets.

Headed into the second quarter, the Yellowjackets attempted to make a comeback, scoring 18 points, while the Bearcats scored 17.

AJ Grant led the second quarter with five points. He made two free throw shots and one three-point shot.
Levens and Mark Taylor both made two layups, scoring four points in the second quarter, while Beard and Demetriss Chappell both made one, giving them two points apiece.

Taylor was on fire following halftime, scoring nine points in the third quarter.

Grant and Dylun Worlds both made free throw shots, following a foul with Grant scoring two points and Worlds scoring one point.

The Yellowjackets trailed behind the Bearcats 43-62 following the third quarter.

The defense put the pressure on the Yellowjackets in the final quarter of the game, allowing them only four points, while the Cats poured in 17.

VJ Ervin scored six points, making two three-point shots to round out the night. Parris made one three-point shot and Chappell, Beard, Grant and Taylor each scored two points.

“We played good defense, I was proud of them,” head coach Jeff Page said.

Page was especially proud of Beard.

“That’s what you want to see,” Page said. “Dialan Beard played great, coming off the bench.”

Beard netted a total of 16 points throughout the night, but Page said it was even scoring night, with Taylor scoring 15 points.

The Bearcats will now head to Albany to play the Westover Patriots.

“The Albany schools are always good,” Page said. “The basketball there is a different beast.”

Page looks forward to the competition and taking on several Albany opponents throughout the season.

The BHS Wrestling Cats attended the Valdosta Wildcat Invitational over the holiday break. There they competed against teams like Clay,... read more