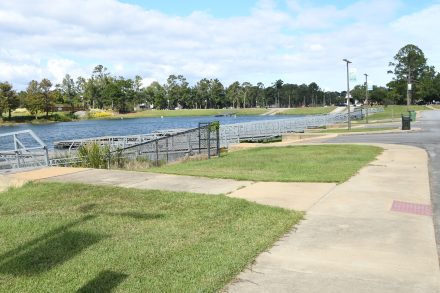 the mega-ramps are shown today after roughly 20,000 boats have launched there.

The Boat Basin had an exciting week, as their mega- ramps officially turned 10- years-old.

On Wednesday, October 6, 2010, Governor Sonny Perdue came to Bainbridge and officially cut the ribbon on the Boat Basin’s mega- ramps and helped launch them.

The project was a joint effort between the City and the Georgia Department of Natural Resources. However, the project wouldn’t have been possible without Perdue’s Go Fish Initiative, which he created to target fishing- based economic development and tourism programs.

In 2010, Perdue was credited with saying, “The mega-ramps are a gift that keeps on giving. People who fish here will keep coming back.”

Perdue had no idea at the time the economic impact the mega-ramps would have for Bainbridge.

“We have seen a positive economic impact of close to $5,000,000 since the ramps were opened,” Crystal Hines said.

The project originally was funded by $500,000 from state Government and a $500,000 match of local money funded by SPLOST.

“In 10 years, it has paid for itself 10 times with four more tournaments on the calendar between now and February,” Hines said.

Perdue said the mega-ramps have all the attributes he envisioned in the Go Fish program. In addition to the economic development and tourism, the mega-ramps are often used by recreational boaters from the surrounding area for enjoyment of the water and nature.

Perdue is thankful that the mega-ramps were a good booster of the local economy, and the City is appreciative to everyone, who has taken advantage of these local funds to use the ramps for healthy and wholesome family activities, tournaments and fishing.

BY ETHAN REDDISH The Bearcats faced off against the Cairo Syrupmakers on Friday night in the first region game of... read more