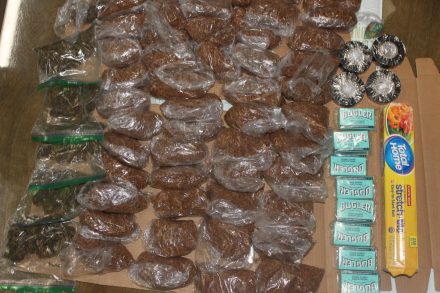 DCSO collected more than 50 bags of tobacco, along with marijuana, MDMA, and other prohibited items during a drug sting on Monday.

Decatur County Sheriff’s Office investigators conducted a sting operation on Monday night upon hearing about a possible inmate contraband drop. This operation led to the arrest of Jessica Hurt and the discovery of more than 50 bags containing smoking tobacco and marijuana.

According to reports, DCSO Investigator Vincent Edmond was on patrol when he was given information by his deputy about a possible inmate contraband drop that was supposed to take place at the Decatur County Air Industrial Park later that evening.

Edmond contacted the source of information, who said a woman named Jessica would be driving a silver Honda sedan and would be dropping off drugs and other prohibited items to inmates. Edmond then set up surveillance around the area and parked his car near the Industrial Park.

At approximately 10 p.m., Edmond noticed a silver Honda sedan drive into the Industrial Park and exit towards the Decatur County Airport. Edmond began following the vehicle and initiated a traffic stop near the edge of the airfield.

Edmond approached the vehicle and made contact with the driver, who he later identified as Hurt. He also noticed several other passengers, one of whom was a 14-year-old male.

Hurt told Edmond she was taking the passengers to the airport because they did not know Decatur County had an airport. While speaking with Hurt, Edmond smelled an odor of marijuana and asked each occupant if they had any marijuana on them. Everyone responded “no,” except for Hurt, who told Edmond there was large amount of marijuana in her trunk.

Edmond then called for assistance from Investigator Adam Mobley, who arrived on scene.

Hurt showed Edmond the white bag in the back of her vehicle that contained a box of home plastic wrap, four rolls of black electrical tape, eight packages of cigarette papers, 55 bags of smoking tobacco, one bag of MDMA pills and six bags of marijuana.

Hurt told Edmond that someone had called her and instructed her to drop the bag full of contraband off at the Industrial Park. Hurt also told Edmond that no one in the vehicle had anything to do with the white bag; she had requested they ride with her.

Edmond then arrested Hurt and had the occupants call for a ride home, before seizing the contraband.

Edmond said the Sheriff’s Office is still investigating who asked Hurt to make this drop and further arrests are pending.