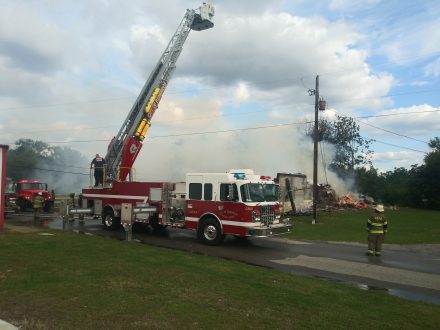 Firefighters responded to a structure fire, where a girl accidentally set fire to a bale of hay that was located inside the property.

Decatur County Sheriff’s Office Investigator Vincent Edmond responded to a structure fire on Monday afternoon that resulted in a total loss and the arrest of two juveniles.

Edmond said several juveniles were located at an abandoned building at the intersection of Colquitt Highway and Rand Floyd Road, when one of them accidentally set fire to a bale of hay.

Edmond said the 13 year-old female was playing with a lighter and piece of paper, when her older sister, 16, told her to stop playing. The girl then laid down the lighter on a bale of hay that caught fire.

The juvenile told Edmond she thought she put it out, but the structure then became engulfed in flames. The structure was being used to store hay, and the fire caused a $15,000 loss.

The juvenile, along with her sister will be charged in juvenile court for criminal damage to property in the second degree, while their 17- year old friend will be charged with criminal trespass.

During court, it will be determined if the juvenile has to repay the owners for the damage caused, due to the fire being an accident.

Although this fire was an accident, Edmond reminds parents to keep a close eye on their children.

“Be mindful of where your children are and what they are doing during this extended time period while they are out school,” he finished.

Graduation plans still being made

While a traditional graduation ceremony may not take place on May 22 as planned, Superintendent Tim Cochran has a virtual... read more