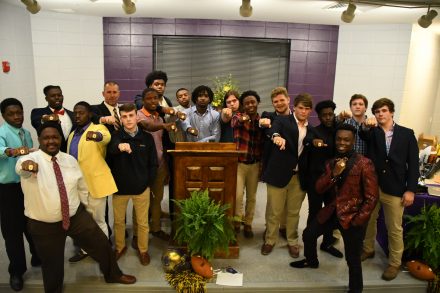 At the most crowded Bainbridge football banquet in head coach Jeff Littleton’s now 7-season tenure in March 2018, Bearcat players were awarded for their hard work, will to win, and historic state title run during the 2018 season.

But really, it was about the hardware.

Players were called up alphabetically to receive their 2018 State Championship rings, each tucked away inside its own box, and letterman jacket patches. Once everyone had received their boxes, the team opened them together. The Bearcat Café swelled with cheering and clapping. Players slid the gold jewelry onto their fingers, posing and high fiving.

“It’s not just a piece of jewelry,” said head coach Jeff Littleton, encouraging his players to realize the rings should be seen as more than just a fashion accessory. It’s a symbol of a team that started the season 2-4 which battled back to the state championship game, he said, where the Bearcats beat Warner Robins 47-41 in triple overtime. That was after beating four Top 10 teams in the state playoffs, where three of those games came on the road, a feat never before done in Bainbridge program history.

2. Lady Cats tennis team makes it to the Final Four in state tournament

On Wednesday, April 24, the Lady Cats tennis team battled Riverwood in the Elite Eight on the road. In a nail biting finish, the Lady Cats won 3-2 and moved on to host the Final Four round of the state tournament.

Coach Amy Thomas said she was so proud of her team. Number one doubles, Bree Powell and Jade Stacey began the day with a 6-0, 6-0 victory, giving BHS the advantage. Number two doubles, Sarah Caroline Darley and Anna Marie Hall followed them up with a 6-0, 6-1 win, keeping BHS ahead.

However, in the singles division things were heating up. Number one singles, Sydnee Burke fell 4-6, 1-6 to opponent, Arden McCord. Number two singles, Mikey Harrell won her first set, but number three singles, Gracie Surratt lost her first set. It was down to the wire. Surratt eventually lost to Caroline Eades 1-6, 3-6.

All eyes were on Harrell.

“It was very dramatic,” Thomas said.

Harrell came out victorious though, after a grueling set of three, securing the Lady Cats a spot in the final four. Her final score was 6-1, 4-6, 6-2.

Wyatt Carpenter first took home the first place win for the 1600M. It would be one of Carpenter’s many victories throughout the day.

The Grace Christian Academy Cougars basketball team was headed to the state championship after a playoff win against Citizen’s Christian on Thursday, Feb. 21.

The GCA Cougars have not won a basketball state championship since 2008, so they were giving it their all Thursday night to make it to the Championship in Macon.

Seth Parker was the star of the show in the second quarter making five three-pointers, while Jones scored four points and Rogers scored two.

The competition heated up after halftime, when the team only scored six points in the third quarter. Carpenter, Jones and Rogers all scored two points.

The team gave it their all in the fourth quarter with Parker making another three-pointer, followed by Rogers scoring four points, Carpenter scoring three, Jones scoring two and Smith scoring one.

Coach Shavon Brown was proud of the team’s 54-49 victory.

In the state championship game against Highland Christian, the Cougars lost 88-64.