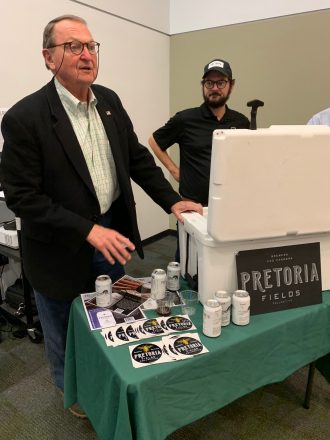 Harris Morgan, left and Corey Flegel, of Pretoria Fields Collective Brewery, prepare to serve beer samples at the close of their presentation to Bainbridge Rotary Club on Tuesday.

Rotary hears the ABCs of making beer from Pretoria Fields

Rotarians enjoyed an early Thanksgiving at their regular meeting Tuesday, complete with a turkey and ham dinner with all the trimmings, and a chance to sample some craft beers from Albany’s Pretoria Fields Brewery.

The program was given by Harris Morgan, co-owner of the brewery and Corey Flegel the marketing manager.

Mr. Morgan, who describes himself primarily as a farmer, said he collaborated with his son Dr. Tripp Morgan, a surgeon in Albany, to open the brewery in 2015.

He described it as a good venture and one in which they grow locally all the products that go into their beers. It has been designated a Georgia Grown product by the Georgia Department of Agriculture.

Some of the contents that go into their beers, depending on the flavor, are basic grains —wheat, oats, rye and barley. Different flavors are created by adding blueberries, blackberries, oranges, strawberries, peaches, pecans and honey.

Mr. Morgan told of a conference he attended in North Dakota, where he learned about an ancient grain called emmer that can be dated back to Egypt thousands of years ago. He described how it grows on strings attached to 20 foot high poles. They have tried growing some, but had to send it to Indiana to be husked.

An ingredient contained in all beers is hops, and they are planning to add five more acres of that product next year.

In addition, the company is interested in growing hemp, from which CDB oil is made, when it becomes legal in January to grow it.

They will make beer containing that product, as well. In answer to a question about hemp, it was explained that the hemp family has three to four different strands. There is the cannabis, from which THC marijuana comes, the CDB variety that contains no marijuana, and fibrous hemps, a versatile product used in cosmetics, paper, Tee shirts and even car parts.

Morgan predicted the hemp industry would supercede the pine tree industry before long.

Corey Flegel then spoke of how their business has grown, as they have concentrated their sales on the South Georgia and Alabama markets. He started a craft beer festival in Americus that has been successful. The products can be found locally at several restaurants and groceries in Bainbridge.

As they continue to grow, they need to find more farmers willing to join their collective and grow their grains and products. They will need 500 more acres of barley to meet their needs.

There are currently 25 to 40 employees connected to the brewery.

Some of the beers, especially the ones with fruits are lighter and on the sweet side, ideal for summer drinks.

They brought two of their specialties – the light Skywater and the dark brown thrasher for people to sample. The brown thrasher is a flavor of the Fall season, made with honey from the bees on the farm. Some of the beers are 6 percent alcohol, while others are less, at 5 percent and even 3.2 percent.

Flegel said they enjoy making all different styles to create some non-intimidating beers that can be enjoyed more with less side-effects.

Their brewery is located in downtown Albany, next to a new restaurant, and they invited all to come visit and take a tour.

With the holidays right around the corner, Grace Christian Academy is well under way in preparing for their annual winter... read more