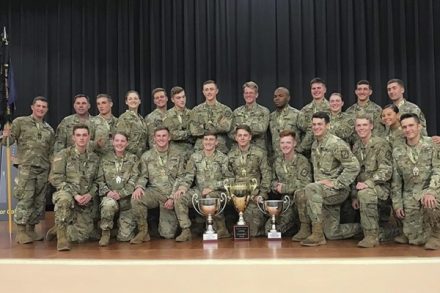 Haydn Griffin and his team smile after winning the Spartan Ranger Challenge. They will now head to Sandhurst.

Haydn Griffin of Bainbridge, Georgia, competed on the University of North Georgia (UNG) Ranger Challenge teams that finished first and second at the Spartan Ranger Challenge. Both teams will compete at the Sandhurst International Military Skills Competition in April as UNG tries for a third straight ROTC title.

Hosted by the 1st Brigade of U.S. Cadet Command, 19 teams from the nation’s junior and senior military colleges competed in the Spartan Ranger Challenge Oct. 24-26 at Fort Knox, Kentucky.

“I am very proud of all of our Ranger Challenge teammates and our coaches,” said Col. Joshua D. Wright, professor of military science at UNG. “Their physical endurance, cognitive strength, teamwork, and dedication has once again shown the strength of our leader development program. This was an exceptional performance.”

The Sandhurst competition will be held at the U.S. Military Academy at West Point next spring. UNG has finished in the top four overall and as the top ROTC team each of the past two years, most recently taking third place in 2019.

UNG Ranger Challenge coach retired Maj. Donovan Duke said he and Maj. Josh Larson, UNG’s active-duty Ranger Challenge adviser, pushed the cadets hard in preparation. Like any competitor, though, he knew the results would provide the proof of UNG’s training.

“Our teams definitely raised the bar,” Duke said. “No one across United States Cadet Command has put in more work or trained harder. It’s truly amazing what our 22 cadets have done, have been through and will go through in preparation for Sandhurst.”

Cadet Alexei Joya, a junior from Gainesville, Georgia, pursuing a degree in interdisciplinary studies, said Duke’s attention to detail has instilled a winning mindset for UNG’s Ranger Challenge program. This marks a third straight Sandhurst appearance and fourth in sixth years for UNG.

“They know that they’re good enough to compete and hopefully win Sandhurst,” Larson said. “The confidence is there, but at the same time, they’re not cocky about it. They’re very professional.”

“It’s a huge credit to the university and the caliber of training our Ranger Challenge team holds itself to,” said Norman, a senior from Jefferson, Georgia, pursuing a degree in business management.