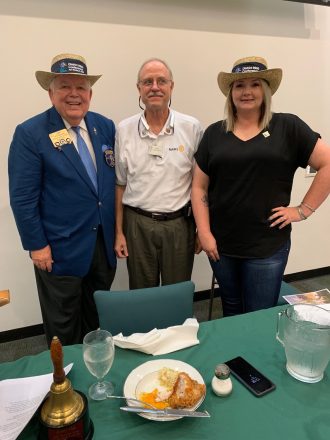 Jim Squire, Governor of Rotary District 6900 paid a visit to the local club Tuesday and officiated at the induction of two new members, as well as giving special recognition to five members who have achieved new levels of Paul Harris Fellows.

He was accompanied and introduced by Cairo club member and Assistant District Governor Candice Eubanks.

New inductees were Jody Beane, affiliated with First Port City Bank and Heith Maxwell, who has spent 18 years in the field of education and is the principal at Bainbridge Middle School.

Squire spoke about the founding of the Bainbridge Club in 1936, saying they had many stories to tell about the past 83 years. At that point he recognized Mayo Livingston, who has been telling the Rotary story for more than 65 years, and presented an award in absentia to Livingston ,who was unable to attend the meeting.

Squire related his talk to this year’s designated theme of Rotary International, Rotary Connects the World, saying he has adopted a motto, Connect with Rotary.

He then spoke of the importance of fellowship and connecting citizens in service. He complimented local members on their educational pursuits and the use of grants available for those purposes, as his focus this year is on lifelong learning.

He praised the passion that develops as compassion, citing as an example Rotary International’s goal to eradicate polio across the world – one person at a time.

With regard to membership, Squire said there are 1.2 million Rotarians in 35,000 clubs across the world, while adding that they often lose as many as they gain. He advised getting new members involved right away so that they feel welcome and a part of projects.

Squire and Eubanks then invited all to attend the District Conference coming up April 30 at Jekyll Island. Promising a theme of good food and sharing of recipes, Friday night will be great seafood dinner, while the Saturday night event has a Kentucky Derby theme.

The meeting concluded with club president Dick Youmans presenting Gov. Squire with a check on behalf of the club designated for Life Long Learning.