Youth take to the courts at Slip, Slide and Serve tennis camp 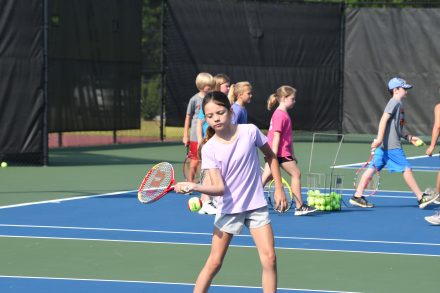 Tuesday morning, kids of all ages could be seen running around the Bill Reynolds Tennis Center having fun for their first day of Slip, Slide and Serve tennis camp.

Assistant Bree Powell said the kids’ half days there are filled to the max with fun activities and tennis competition.

“We teach them the fundamentals of tennis,” she said. “Our hope is that by the end of the week they can play for points.”

Powell said most of the kids have never played before and are beginners, but that’s okay because one of her favorite parts is watching all the kids learn the game.

They begin the day with an obstacle course around the four courts, which she said the kids seem to really enjoy. They are then broken up into groups based on skill level, where they participate in a variety of drills that help with hand eye coordination, such as tossing the ball to each other and hitting.

Powell said kids love the games and slip n’ slide the most.

Isabella Dean, 6, said she was most excited to swim, but she also likes to play. She has been playing for a year, but learned how to finally swing a backhand on Tuesday.

Keller Adams, 8, also was excited she finally learned to swing with two hands, but said she’s most excited about making friends this week.

Saylor Tuten, 9, has been taking tennis lessons, so she said she didn’t learn anything during today’s review, but she is ready to play the game, because she doesn’t get to play it that often in tennis practice.

The kids were all excited to get back on the courts before heading to the slip n’ slide at the end of practice.

Kids who weren’t able to participate in this week’s camp can register for June 10-13 at playbainbridge.com.