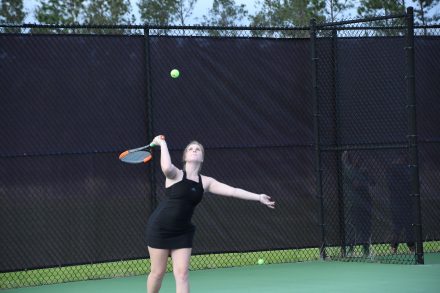 Tuesday night the Bearcats and Lady Cats tennis team faced off against non-region opponents, Colquitt County, where the Lady Cats won and the Bearcats came up just short in a 2-3 match.

Number one singles player, Mikey Harrell came out strong, beating opponent Ava McCraine 6-2, 6-4. Number two and three singles, Gracie Surratt and Piper Harrell had to battle it out in three sets against their opponents, but won.

Coach Amy Thomas loved the mindset of the players.

“At times both teams were down, but they never let up,” she said. “They hunkered down and persevered. The girls efforts resulted in an awesome, definitive win.”

The Bearcats began the matches with a win. Number one singles, Robert Bryan Shockley won his sets against Nathan Corley 6-4, 6-4 and number three singles, Austin Aldridge won his sets 6-4, 6-3.

Number two singles, Cole Buchanan and number one and two doubles, Lawson Humphrey, Brad Mitchell, Ben Mitchell and Brent Miller lost their matches. However, Mitchell and Miller tied their first set 6-6, before going into a tiebreaker.

Thomas recognizes the boys fell short of a win, but said they had a victory in their own way.

“Losing 2-3 to a 7A school reinforces to the boys that they can hang with the best,” she said.

The boys are hoping to score some wins this weekend at the Bearcat Brawl, when they face off against various teams such as, Thomas County Central, Early, Cook and Miller County. The matches began Friday, but continue into Saturday morning, beginning at 9 a.m.