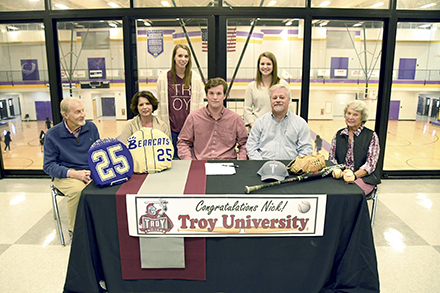 Bainbridge pitcher Nick Barber will continue his family’s legacy at Troy University. He signed a scholarship to play ball for the Trojans Friday.

Barber’s mom and two older sisters all attended Troy. He agreed it’ll feel a lot like home because of that.

“I love the facilities,” said Barber. “They are all turf. I really like Coach (Mark) Smart and coach Matthew Hancock.”

Barber’s parents are supportive of their son’s decision, mainly because of their familiarly with the school, but also because they were impressed with the coaches and how good of a fit they were for their son.

“I’ve always thought that a coach is instrumental in raising your kids,” said Mr. Barber. “I think this coach is that guy. This was his first choice of where he wanted to go. With our history there and familiarity with it, it works.”

Barber has a career ERA of 2.09 through his first three seasons with the Bearcats. He’s struck out 157 batters through 107 innings. His junior season, Barber’s ERA dropped to 1.16. He had 6 wins and 5 losses to his name.

For his senior season, Barber said he wants to pick up where he left off last year and continue to improve before heading to Troy.

“I just want to make it just like last year,” Barber said. “Go complete games, get more into shape and tone up for college.”

Bainbridge coach Brian McCorkle praised Barber for his strong character and his sharp abilities on the mound.