Madeline and Addy are sometimes rather competitive when it comes to getting Papa’s attention.  One of the ways that they try to please me is shutting down the video and sound equipment after church.

They both know the routine of various buttons to touch to shut things down and they are always willing to help; they sometimes try to outdo the other by seeing who can get to the equipment first.  Last Sunday Madeline had to leave shortly after church was over to go to a birthday lunch for a family member.  That left only Addy to help Papa take care of things.   But as she was finishing up I heard a rather loud boom as though something had hit the floor.  I looked over by the sound board and found Addy reeling in the cord for my camcorder.  It sits about six feet off the floor on a shelf from which I record the services.  I went to investigate further and found what I feared—when she pulled the cord (which she was not supposed to do) it sent the camera crashing to a hard landing on the floor.  But how can you scold a child who is just trying to help?

As I went over to assess the damage I saw a small discolored area on the corner of the camera screen; it did not look too bad and I hoped that that was the extent of the damage.  When I checked it again in a few minutes, however, I discovered that what had been a small area of distortion had spread and consumed the entire screen.  In short, my camcorder is now useless and it looks like I will be doing some unplanned shopping.

I admit that I was less than happy about what happened, but as I have been told all my life, there is no use to cry over spilled milk.  It also served as a lesson about holding loosely to material things and keeping the focus on the eternal.

When the Lord was teaching about what we should hold as important in our lives, He provided valuable wisdom in Matthew 6:  “Do not store up for yourselves treasures on earth, where moth and rust destroy, and where thieves break in and steal.  But store up for yourselves treasures in Heaven, where moth and rust do not destroy, and where thieves do not break in and steal.  For where your treasure is, there your heart will be also” (Matthew 6:19-21, New International Version).

In an episode of The Andy Griffith Show there was a scene involving Opie bringing home a stray dog.  He was using a rope as a leash attached to the dog’s collar as he went into the sheriff’s office to show Andy his newly acquired friend.  When he told Andy that the dog had followed him, Andy asked him why he had a rope tied to the dog if it was following him.  He responded by saying that the dog followed him better with the rope attached!

Temporary things can get so attached to us that they drag us around and control us.  We must hold loosely to things that will fade away and cling to what really endures:  our faith and our relationship with God.

As we prepare to celebrate our nation’s birthday it is a good time to pause and remember how God has blessed and provided for us.  To the people of many nations on the earth, most of us would be considered rich.  Yet there is the danger that material prosperity, as enjoyable as it may be, will be allowed to consume more of our affection than God ever intended.  As we observe our national freedom during this patriotic season, it is a good time to be warned not to allow our quest for temporary things to enslave us spiritually and emotionally. 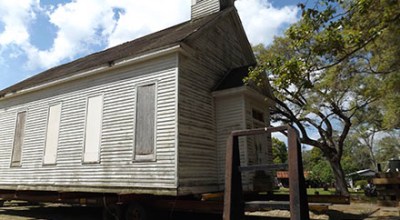