Student collects jeans for other teens 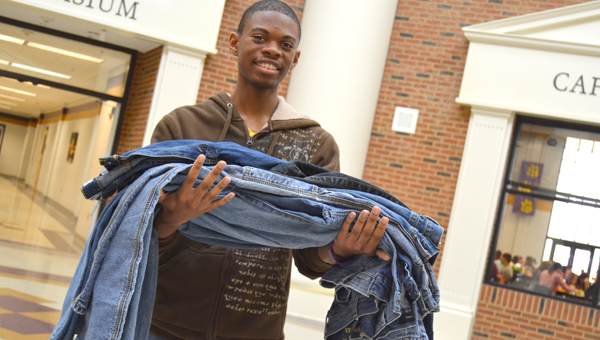 Trey Alston is collecting jeans for homeless teenagers in the area.

Trey Alston heard a small voice in his head that told him to, “just do it.”
A senior at Bainbridge High School, Alston was in search of scholarship opportunities on www.dosomething.org, a non profit website encouraging young people to believe in themselves and start something big.
Alston found a jeans drive, Teens For Jeans, that donated jeans to homeless and created scholarship opportunities for those schools that donated the most jeans.
But at first he doubted himself before he went out of his comfort zone to do something.
“I actually started this really late,” Alston said. “I am a really shy person and I know that to lead donations like this you have to talk to people.”
After seeing Teen for Jeans, he thought about starting it at Bainbridge High School, but tucked the idea away in his back pocket, afraid of stepping out and doing it.
But when he came back to school after Christmas break, things changed.
“I just heard a voice in my head when I remember Teens for Jeans again telling me to just do it,” Alston said.
In less than five weeks, Alston has collected 138 pairs of jeans from students and friends. There are donation boxes set up around the school that he checks each day.
Teens For Jeans and Dosomething.org have been proud partners of the jean collection drive, which collected more than 2.5 million pairs of jeans across the country for homeless teens last year. In 2011, 12,000 schools in the nation participated.
Alston presented the idea to teacher BHS teacher Jennifer Oldaker who promptly agreed to house the jeans collected in her classroom.
“He did this on his own and took the initiative to go out on a limb and do this,” Oldaker said. “Everyone has been donating because everyone believes in him.”
Alston said he is attending Bainbridge State College next year after graduating from Bainbridge High School. He said throughout this experience he not only came out his comfort zone, but also learned to never underestimate his own power and abilities and to never doubt yourself and what you can do.
For other teens with an idea and vision for how to make a change, Alston said, “just do it.”