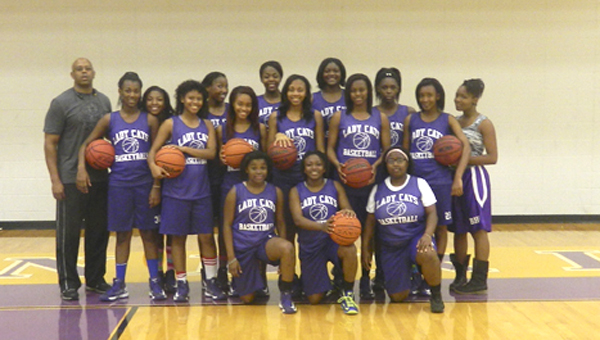 Head coach Kelvin Cochran stands ready for the season in the Bainbridge gym with his 2013-2014 Lady Cats team.

Bainbridge High School Lady Cats head basketball coach Kelvin Cochran plans to start three guards in his lineup during the 2013-2014 basketball season.
“We return all five starters from last season and three of them are guards,” Cochran said Wednesday morning as he looked toward his team’s upcoming afternoon practice session,
“We have Beonka Madge at point guard, Alexandria Carter at guard Tameka Levens at guard,” coach Cochran said. “Longeisha Emanuel will start at forward and Patra Parris will start at center. Guard Alexis Ruff and Asia Gordon, who can play forward or center, will see duty off the bench.”
“Alexandria Carter, who had some shoulder problems last season, appears to be healed and ready to go.” With five starters back our goal is to win the Region 1AAAAA championship. On paper our biggest challenger could be Northside Columbus.
“Like us they have their key starters back. Lee County who returns two starters and Hardaway of Columbus should also be good.”
Carter says her shoulder is now stable and she is looking forward to the upcoming season.
“It is an advantage that all five of us started together last season,” Carter said. “We know each other’s moves and cuts and how to get the ball to each other.”
Coach Cochran says he likes the depth his Lady Cats have as they look forward to the coming season.