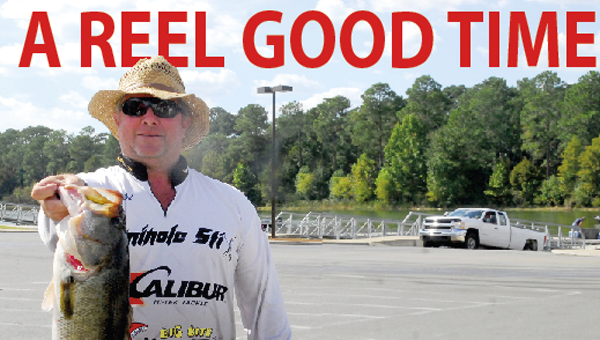 Once a year bass fisherman descend on Lake Seminole via the Earl May Boat Basin in Bainbridge for catch that could reel in thousands.

Nearly 200 fishermen pulled their boats into Earle May Boat Basin early Saturday morning for the third annual Lake Seminole Open, a two-day bass tournament sponsored by the Bainbridge Convention and Visitor’s Bureau.
Jason Smith and Rodger Beaver won the tournament and $10,000. They fell in 27th place on Saturday, weighing in their catches at 12 pounds three ounces. But Sunday’s catches launched them to the top of the ranks with 28 pounds 13 ounces worth of fish.
They beat out Robert and Rick Tendell by five ounces.
“It was really tough, the fish were scattered a lot,” Smith said. “We just had to put the motor down and cover a lot of water.”
The team lost a few bites on Saturday and it ended up hurting them, Smith said. But concentration and skill led them to a comeback victory on Sunday.
Smith and Beaver’s biggest fish weighed in at 7 pounds three ounces, tying for second place with Sean Neel and Andy Koundourakis. The biggest fish caught during the tournament was by Tony Davis and Tommy King, weighing nine pounds flat.
Brandon Medlock and George Kapiton had the biggest fish on Saturday at seven pounds 10 ounces.
Fishermen were to pull in their boats by 3 p.m. on both days, pour their catches into bags and weigh them on the stage.
Matt Palmer, Bainbridge City Manager Chris Hobby, former Bainbridge employee Tommy King and other members of the bass committee started the tournament three years ago to a resounding success. 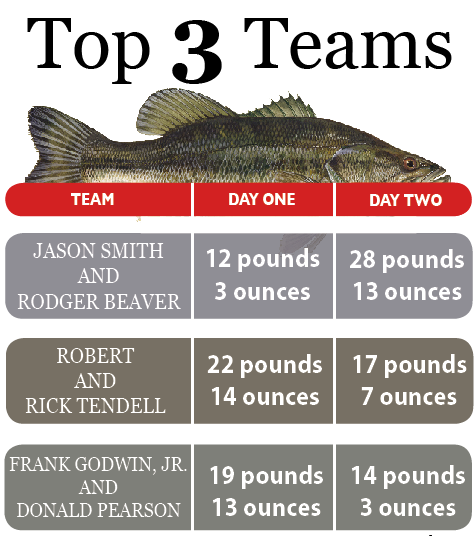 Now, hundreds of people come to the Earle May Boat Basin to participate in the tournament, support the city and celebrate their love of bass fishing.
The tournament paid out $17,000 plus $500 for the biggest fish, all of which was funded 100 percent by the money made from the tournament and co-sponsor Rifle and Rod magazine.
“I appreciate the city putting on such a good tournament,” Smith said. “We wish they would do more like it.”
Bainbridge Convention and Visitor’s Bureau Executive Director Adrienne Harrison was excited with the results of this year’s tournament
“It was a wonderful turnout this year,” Harrison said. “Everything ran really smooth.”
Harrison and the Convention and Visitor’s Bureau are making plans to host another fishing tournament in March 2014 to coincide with the annual River Town Days Festival.
Full tournament results can be found at www.bainbridgecity.com.