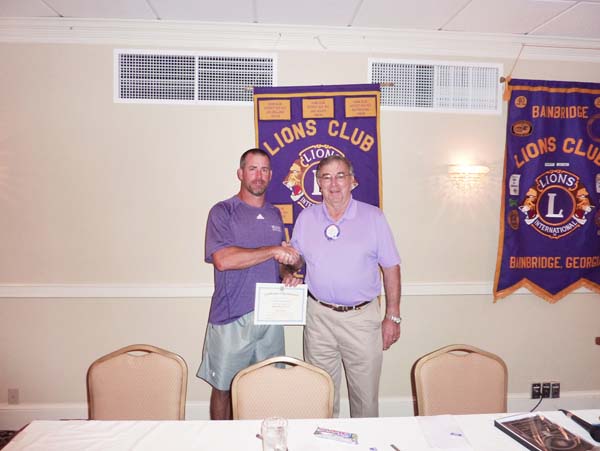 Littleton shared some stories of coaching experiences that he is using to prepare him as head football coach. Littleton has been pleased with the attitude and work ethics of his players. He stated that this year’s team is extremely young and inexperienced, and they will require a commitment from themselves, their coaches, and the community.

Littleton also focused on the challenge of the coaching staff to build a role-model relationship with the players in football matters as well as academically and personally. The Bainbridge Lions Club members wish the Bearcats the best in the upcoming football season.

In other business, newly elected Lion President Frank Loeffler presided over the installation of the 2013-14 directors and officers. Lion Ken Markham effectively charged these inductees with their responsibilities. Loeffler recognized outgoing president Brenda Howell with a plaque and recognized Jim Beck as Lion of the Year. Loeffler also named committee member chairs to oversee various projects during the upcoming year.

With the start of practice less than a month away, new Bainbridge football coach Jeff Littleton’s Bearcats are working hard... read more