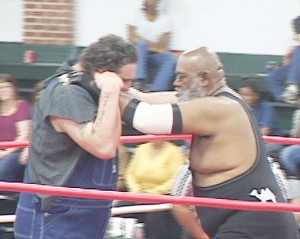 “The Black Assassin,” also known as Rev. Adren Bivins of Bainbridge, grapples with his opponent in a charity wrestling match earlier this month in Donalsonville.|Submitted

A professional wrestling charity benefit, “The Headlock on Cancer,” recently raised $3,500 for the American Cancer Society and the Seminole County Relay For Life.

The event, held in front of a packed crowd at Malcolm Gym in Donalsonville, Ga., featured several local wrestlers. Among them was “The Black Assassin,” also known as the Rev. Adren Bivins of Bainbridge, founder of the Laymen Brotherhood Second Chance Outreach Ministry. Also filling out the card were wrestlers like Bullet Bob, Steve Armstrong, Lord Humongous, the Executioner, the Law Dawgs and the Mississippi Hillbilly.

The Black Assassin defeated his opponent, the Mississippi Hillbilly, in 15 minutes.

The wrestlers signed autographs, took photos, and donated their talents for free.

Bivins said it was special to support the American Cancer Society because he had a brother, Daniel, and other family members and friends who lost their battles to cancer.

The matches were promoted by Scott and Luke Lawson of S & S Wrestling Promotions of Donalsonville.

Littleton getting prepared for spring practice