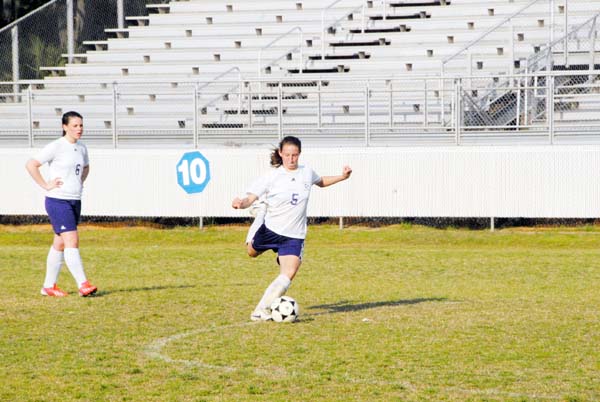 Tuesday evening, the Bainbridge Lady Cats varsity soccer team gave a valiant effort as they travelled to the region-leading Thomas County Central Lady Jackets in Thomasville, Ga., but came up on the short end of a 4-1 loss.

Central built a 2-0 halftime lead to propel the hosts to victory.

The Lady Jackets increased their lead to 4-0 in the second half before Bainbridge broke through. In the 75th minute, Bainbridge sophomore forward Longeshia Emanuel took a pass on the right side from junior midfielder Paige Braswell, tapped the ball past two defenders, dribbled and shot from 10 yards out to break up the shutout.

“We really made strides today and gave a great effort,” Bainbridge coach Chip Ariail said. “I thought as a whole we played well. Senior midfielder Caitlin Cato gave a tremendous effort, as did several others. Emanuel, who threatened the Jacket backline all afternoon, got off three shots and played her best game on the field this season.

Bainbridge was scheduled to host Hardaway on Friday night. The Lady Cats will resume their schedule April 10, when they host the Monroe Lady Tornadoes at Centennial Field.

Forward Aida Gonzalas scored the decisive goal late in the first half.