City Hall renovation could be soon 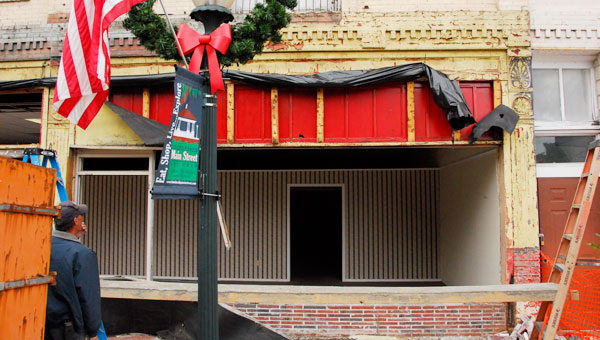 City workers were busy Thursday working on the Gowan Building, which will temporarily house city hall if the planned renovation takes place.|Brennan Leathers

City of Bainbridge workers have been busy uncovering the façade of a historic downtown building that will likely serve as the temporary home of employees of City Hall, while that building is being renovated.
In anticipation of the City Council giving its final approval for the City Hall renovation project, which will take about a year to complete, the Downtown Development Authority has been renovating the old Gowan Furniture Building at the corner of Broad and Water streets. The DDA purchased the building, which also formerly housed Allen Sports, earlier this year.
At Tuesday night’s City Council meeting, the Bainbridge Downtown Development Authority—a separate entity from the DDA that has been operating in recent years—will present the council with its recommendation on how to finance the City Hall renovation project, which has an estimated construction cost of $3.4 million. The new DDA has Mayor Edward Reynolds and Post-Searchlight Publisher Jeff Findley among its members, and was only created for the purpose of legally arranging financing for major downtown projects—something the current DDA is not permitted by law to do, according to Mayor Reynolds.
Once architectural fees, furniture purchases and contingency funds are added in, the total “move-in” price of the project should be about $4,185,000, City Manager Chris Hobby said.
After the financing—which is based on the architectural firm’s budget estimate—is approved, the next step will be for the City Council to consider the construction bid from Childers Construction, which will likely happen in January, Hobby said. If everything goes as planned, the City Hall renovation could start next February, he said.
There are conceptual plans to turn the Gowan building into a mixed residential/retail complex, after the City Hall renovation is complete. The DDA could do some of the renovation itself, as it did on the Water Street project, or lease or sell the building to a third party.
Meanwhile, City Hall employees—everyone from City Court clerks to the people who take utility bill payments to the city manager himself—will move around the corner and work out of the first floor of the Gowan Building, which has lots of space in good condition.
“The finance department will go in the space Allen Sports used to be in on the corner, while everyone else will be spread out in cubicles in the Gowan Furniture space,” Bainbridge Community and Economic Development Director Amanda Glover said. “Since it just closed a few months ago, it’s in good shape, so all we’ll really have to do to get the inside ready is to wire it for our computers and telephones.”
City workers have already uncovered history in the cast iron façade framework bearing the inscription of George L. Mesker and Co. of Evansville, Ind., a manufacturer whose work is now considered classic among historic architecture buffs.
This week, the city’s maintenance crew — Mike Hammer and Jessie Tindell — stripped away some stucco that had been laid over the building’s original transom windows. The line of window panes have been painted red and are partially missing, so it’s not certain if they will be kept, although the DDA is trying to restore the appearance of original building’s historic façade as close as possible, Glover said.
You Might Like