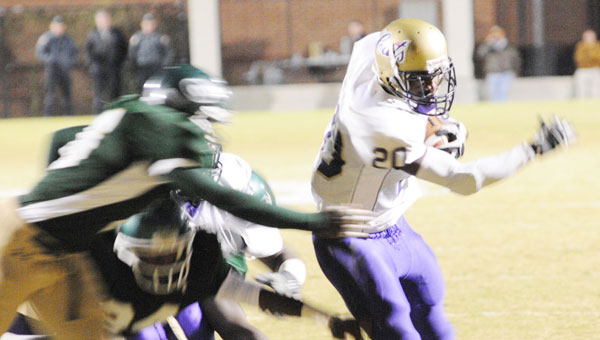 BAINBRIDGE RUNNING BACK DAMIAN BOUIE rushes ahead for a gain Friday night in Waycross, Ga. Bouie finished the game with 11 rushes for 105 yards and two touchdowns, but the Bearcats came up short and lost to the Ware County Gators, 21-14, in the Class AAAA playoffs.|Jeff Findley

By BRENNAN LEATHERS
and JOE CRINE
News Writer and Sports Editor
WAYCROSS, Ga. — Despite a last-minute drive, the Bainbridge Bearcats lost their opening-round state playoff game, 21-14, to the Ware County Gators in Waycross.
Friday’s loss leaves Bainbridge’s final season record at 8-3 overall and 5-2 in Region 1-AAAA.
Ware County led 21-14 with 1:35 remaining in the fourth quarter, but fumbled the ball and it was recovered by Bainbridge’s Rodney Glenn in Bearcat territory. Bainbridge drove down to the Ware County 39, but Glenn was tackled there as time expired in the game.
On the Bearcats’ first drive Friday night, Glenn caught a 22-yard pass from Quincy Fortson to take the ball to the Ware County 31. A 15-yard facemask penalty against the Gators moved the ball to the 15. Damian Bouie rushed 8 yards to the Ware County 7, and Terry Lewis then ran 5 yards to the 2-yard-line.
Two plays later, Bouie ran for a 3-yard touchdown with 6:22 left in the first quarter, to cap a nine-play, 60-yard drive.The Gators blocked Daniel Provence’s extra-point attempt, making the score 6-0.
With 9:22 left in the second quarter, Ware County’s Chase Morris caught a 44-yard touchdown reception, from Josh Bennett, to put the Gators ahead 7-6.
Aided by a block by Devin Hubbard, Bainbridge’s Greg Cooper returned a punt 27 yards to the Bainbridge 45 with just under five minutes in the second quarter. Lewis ran 8 yards to the Ware County 47, and then 10 more yards to the 37. But two penalties and two rushes-for-losses moved the ball back to the Bainbridge 41 and the Bearcats were forced to punt.
The first half ended with the score Ware County 7, Bainbridge 6.
With 10:38 left in the third quarter, Bainbridge’s Bouie ran 65 yards for a touchdown to cap a three-play, 72-yard drive. The Bearcats attempted a two-point conversion and were successful; Lewis ran into the end zone to make the score Bainbridge 14, Ware County 7.
A celebration penalty on the touchdown forced the Bearcats to kick off from the 25-yard-line.
With 3:14 left in the third quarter, Bennett ran in 9 yards for a Gator touchdown to cap a five-play, 82-yard drive. The extra point was good, tying the score at 14-14. A chop block penalty called against the Bearcat defense moved the ball from the Bainbridge 21 to the Bainbridge 9, setting up the score.
With 5:05 left in the game, Ware County’s Xavier Tobler ran in 3 yards for a touchdown, to make the score 21-14 in the Gators’ favor. Several rushes by Bennett pushed the Gators down the field in a 14-play, 82-yard drive.
On their next drive, the Bearcats were facing a fourth-and-2 from their own 36. Fortson’s pass to Cameron McDowell was incomplete, turning the ball over to the Gators with just over 3 minutes left.
Facing a third-and-4 deep in Bainbridge’s territory, the Gators ran for a first down to the Bearcats’ 10. With only 1:35 to go, it looked as if Ware County would simply run out the clock.
But on the next play, the Gators fumbled and Glenn recovered, giving the Bearcats one last chance to come back.
Fortson scrambled for a first down at the Bainbridge 33, then passed to Greg Cooper, who took the ball to the Bainbridge 45 with 32 seconds to go. Lewis caught a screen pass for 4 yards to take it to the Bainbridge 48, but a false start against the Bearcats pushed the ball back 5 yards.
With 6.6 seconds left, the Bearcats faced a fourth down. After a timeout by Ware County, Fortson scanned across the field for a receiver and threw to Glenn. Glenn, who scored the winning touchdown a week before, twisted and turned forward, but was tackled at the Gators’ 39-yard-line as time expired, leaving the final score 21-14 in Ware County’s favor.
Bouie had 11 rushes for 105 yards and two touchdowns. Lewis had 17 carries for 63 yards.
You Might Like