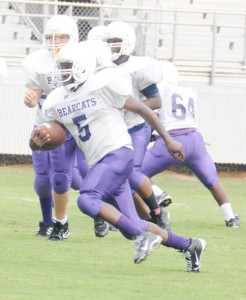 Running back Dalvin Spivie ran for one touchdown and caught passes for two more, Monday at Centennial Field, leading the Bainbridge Middle School seventh-grade Bearcats to a 22-16 victory over Thomasville’s MacIntyre Park Middle School seventh-grade Bulldogs.
The game, which ended the season, was a makeup of a Wednesday, Sept. 21, rainout. The Bearcats finished with a 2-4 record.
Spivie ran 79 yards for a touchdown with 3:18 left in the second quarter and ran in for the two-point conversion, giving the Bearcats an 8-0 lead.
The Bulldogs pulled even 8-8 at halftime, scoring on a 40-yard run with just seven seconds left in the second quarter, and running in for the two-point conversion.
After recovering an onside kick attempt at midfield, Spivie caught a pass in the left flat from quarterback Eddie Cooper and raced 50 yards for a touchdown as the first half clock expired.
Spivie took a direct snap and ran in for the two-point conversion, sending the Bearcats to halftime with a 16-8 lead.
They increased their advantage to 22-8, when Cooper threw to Spivie in the right flat and he raced 30 yards for a touchdown as the fourth quarter clock ticked down to 3:21. Cooper tried to throw for the two-point conversion, but it was intercepted.