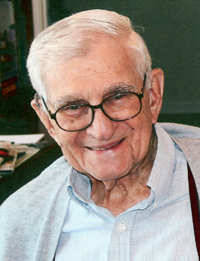 Melvin Nussbaum Jr., arguably one of Bainbridge and Decatur County’s leading citizens, died at the age of 96 on Thursday, Sept. 8, at Memorial Hospital.

A 1932 graduate of Bainbridge High School, he went on to attend the University of Alabama on a football scholarship.

He is best known for his 45-year association with Miller Hydro Company in sales and management, and for his civic involvement with The Bainbridge Rotary Club and Bainbridge Country Club, both of which he served as president. He was also a past president of Temple Beth El.

Nussbaum was featured in the Fall 2010 Bainbridge Living magazine where he gave his views and memories on football. In an interview conducted by The Post-Searchlight’s sports editor, Joe Crine, Nussbaum said, “I really don’t remember much special about Bryant. He was a very good player but not one of the stars. He went on to become the greatest college football coach of all time, but at Alabama I just remember him as a regular guy and one of many teammates.”

Mr. Nussbaum was preceded in death by his wife, Florence Thompson “Flee” Nussbaum, his brother, Benton Nussbaum and his wife, Ophelia Strickland Nussbaum.

The family will receive friends Saturday, Sept. 10, from 3 to 6 p.m. at the home of Freddie and Deedi Nussbaum Eubanks, 1604 Douglas Drive, Bainbridge. A graveside funeral service will be held at 2 p.m. on Sunday, Sept. 11 at Oak City Cemetery.