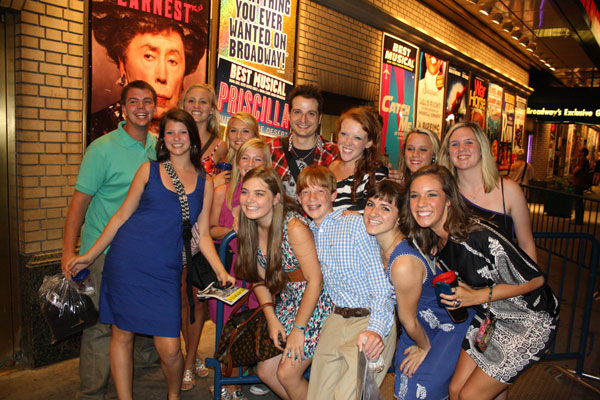 FOLLOWING THE PERFORMANCE of Memphis at the Shubert Theatre, Thomasville Music and Drama Troupe members stayed in the theater for an educational talk-back with seven cast members, including Bryan Fenkart, who played lead character Huey Calhoun, who is surrounded by the Troupe members. 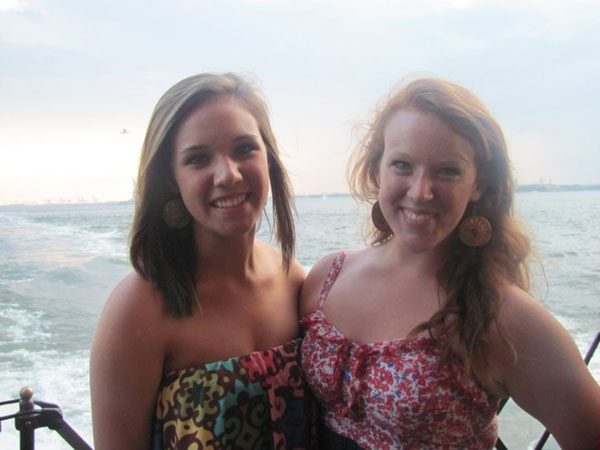 ABOARD NEW YORK’S Staten Island Ferry, from the left, Jennifer Voyles and Wynn Butler, both Bainbridge residents who went on the New York trip.

A group of Thomasville Music and Drama Troupe members—including Jennifer Voyles and Wynn Butler of Bainbridge—recently spent time in New York learning about the performing arts up close and personal.

As part of the Troupe’s four-day theater experience enrichment trip to Manhattan, the group of 21 students and chaperones participated in a theater workshop, saw three Broadway musicals and met with professional actors, singers and dancers.

Troupe members saw Wicked, Memphis and How to Succeed in Business Without Really Trying on Broadway and had the opportunity to stay after one of the performances to meet with cast members. Following the performance of Memphis at the Shubert Theatre, Troupe members stayed in the theater for an educational talk-back with seven cast members, including Bryan Fenkart, who played lead character Huey Calhoun, and John Jellison, a veteran of 18 Broadway productions.

The performers answered questions about their education and training, their rehearsal regimes, the process of building a character and their advice to young performers, among others. Two even recalled having participated in student talkbacks with Broadway casts during their high school years.

After Wicked and Memphis, Troupe students also met with performers at the stage doors where they took photos and got autographs.

The students also participated in a theater workshop with Tony Galde, a cast member of Wicked for the past seven years. Galde, a 25-year veteran of New York theater who made his Broadway debut at 18, talked with Troupe members about his career path, answered questions about Broadway and the physical requirements of a professional theatrical production and taught them two dance combinations from the long-running hit show.

The workshop took place at Ripley-Grier Studios, one of midtown Manhattan’s busiest rehearsal and audition spaces, with cast members from the Broadway production of Billy Elliott rehearsing just across the hall.

“I am privileged to have participated in such an educational, productive trip along with some of the most influential people in my life,” said Voyles, a recent graduate of Bainbridge High School. “I enjoyed the three Broadway shows we saw, but I have to say that Wicked was by far my favorite.  Wicked definitely exceeded my expectations and was, well … wicked!”

Butler, a rising sophomore at Bainbridge High, said, “The most educating activity for me was working with an actor from the Broadway show Wicked, which is said to be one of the best Broadway shows of the decade. We got the amazing opportunity to learn choreography from two musical numbers in Wicked. The Troupe also got the opportunity to ask the actor how he got started in the business.”

The enrichment trip wasn’t all work.

“One activity I really enjoyed was going to the Stardust Café,” added Butler. “The staff of the cafe are actors, actresses and singers who are trying to make it to Broadway. They entertain you by singing songs, dancing and getting the customers involved, no matter what age.”

Troupe officials said theater enrichment trips have been an optional part of the Troupe experience since founders Fred and Winnie Allen first took the group’s early members to New York in 1973. The trips provide hands-on educational opportunities that can’t be duplicated locally.

“One of the benefits of Troupe is that, in an era of budget shortfalls and educational cutbacks, we are able to offer our performing arts program to students from different school settings from across the region—public, private, even home-schooled students,” explained Troupe Co-President Rick Ivey. “So while this high school or that middle school might have to cut back on its arts program, students still have access to our unique performing arts experience and enrichment activities.”

Although details are still being finalized, Troupe will conduct auditions for new members in mid-August, with opportunities for students of varying experience and training levels. Some Troupe members are highly skilled musicians, performers and dancers; others come to Troupe with little or no arts training or background, simply wanting to learn and experience the performing arts first-hand, Ivey said.

The Thomasville Music and Drama Troupe seeks a diverse membership of students from grades seven through 12. Last year, the group numbered 120 members from Thomas, Decatur, Grady and Mitchell counties.