Rogers is governor of Girls State 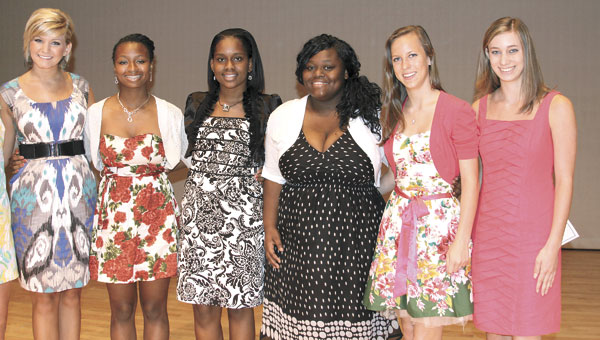 WITH THE GIRLS STATE GOVERNOR, Ashley Morgan Rogers, in the middle, are, Agnes Harrell, on the left, and Mrs. Jane Kinchen, on the right. Both Harrell and Kinchen has served as Georgia Girls State staff members for many years.

Ashley Morgan Rogers, who received the nomination of the Federalists Party, was elected governor by a group of 294 participants to the annual Girls State recently.

As the first participant sponsored by Unit 62 to be elected governor of Georgia Girls State, Rogers said she was humbled by the experience and upon completion of her acceptance speech, she received a standing ovation, which was initiated by her opponent.

As the recipient of the Patsy H. Jones American Legion Auxiliary, Georgia Girls State Governor’s trophy and a bouquet of roses, Rogers was sworn in, and henceforth presided over the last legislative session, having the power to pass or veto bills.

As the newly elected governor of Girls State, Rogers received an invitation to speak at the 91st American Legion Auxiliary Convention in Dalton, Ga., where she shared her “amazing experience” and took the opportunity to thank all of the women who worked so hard to make Georgia Girls State possible year after year.

Georgia Girls State has been sponsored by the American Legion Auxiliary, Department of Georgia since 1945.

It has been supported by local Auxiliary units, and interested civic and patriotic organizations.

At Georgia Girls State, which takes place each summer on the campus of Georgia Southern University in Statesboro, Ga., participants take an active role as citizens and study local, county and state processes. They do this by setting up their own miniature city, county and state governments and administering them according to the laws of the state.

In addition, through division of the citizens into two political parties, the participants are allowed to gain a special knowledge of how a two-party system operates.

Under the guidance of skilled counselors and other staff members, the participants learned and then practiced through self government, the duties, responsibilities and privileges of American citizenship. As Girls State citizens, the girls participated in mock political parties and elections were held to fill city, county and state positions; activities included legislative sessions, campaigning, party rallies, debating and voting.