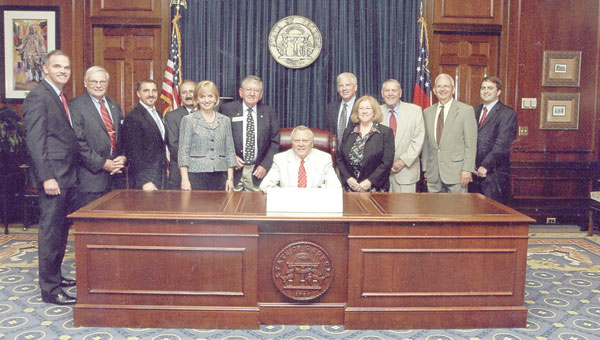 A bill sponsored by Georgia State Rep. Gene Maddox (R-Cairo) and very near to the retired veterinarian’s heart was signed by Gov. Deal on May 11.

House Bill 60 is designed to attract young veterinary graduates to counties void of food animal veterinary services by offering loan scholarships to students who are willing to commit to provide services in rural Georgia counties in need of these specialized services.

The bill authorizes the State Veterinary Education Board to purchase a young graduate’s education loan debt of $20,000 per 12 months of service in a rural county. The board will make available loan purchases not to exceed $80,000 per person.

The board can offer loan purchase agreements up to a maximum of five persons per year with graduates who are willing to practice in approved rural counties in Georgia having a population of 35,000 or less.

Rep. Maddox has been laboring over this bill since his election to the House due to its “critical” nature. He first presented the bill in 2007-08, and it moved all the way to Rules Committee, but was held up because “appropriation money wasn’t there.”

It was presented and held up again last year due to funding shortfalls.

This year, the bill received passage in the House on March 8 and passed the Senate on April 11, thus giving the “go ahead” to establish the board.

“Once appropriations puts money in there, it (the program) will be activated,” explains Rep. Maddox.

He says the shortage of food animal veterinarians is the result of greater salary opportunities for vets who specialize in small and companion animal services, in addition to more favorable working conditions and controlled hours. In his many years providing large animal veterinary services, Maddox says, “It wasn’t unusual for me to be out at two or three o’clock in the morning delivering a calf; for less salary, harder working conditions and more hours.”

HB 60 calls attention to the important role food animal veterinarians play in providing services to livestock farmers, but Maddox also points out the possible demand for large animal vet services in the event of an epidemic of animal transmitted diseases.

“If we were to have a devastating disease to come in here that was transmitted to man through large animals and we had no vets to go out there and pull blood samples or perform tests on these animals, we’d be in serious trouble,” he said.

Maddox, who modeled HB 60 after the rural medical doctor loan forgiveness program, reported that the American Veterinary Association is offering one scholarship in each of all 50 states to students who will commit to providing food animal veterinary services in rural counties.