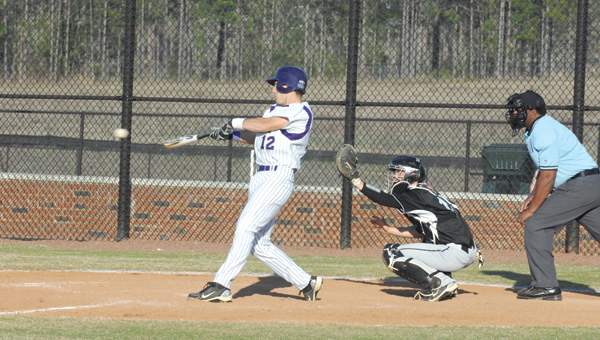 The Bainbridge High School Bearcats rallied for three runs in the bottom of the fifth inning here Friday, but it wasn’t enough to edge the Houston County Bears, who won 8-5.

The Bearcats took a 5-6 overall record and 0-3 Region 1AAAA mark into Tuesday’s region home game with the Lee County Trojans.

BHS will host the Hardaway Golden Hawks of Columbus in a region game Friday at 5 p.m. at Bearcat Field.

BHS shortstop Steven Bench ignited the Bearcats’ fifth inning rally with a one-out single. Brandon Bates was then hit by a pitch, putting runners on first and second.

Designated hitter Blake Voyles followed with an RBI single to right, which drove in Bench and moved Bates to third.

With catcher Drew Kelley at the plate, a wild pitch allowed Voyles to move up to second. An RBI single up the middle by Greg Lee drove in Bates to make the score 5-3. Voyles came in with the fourth run on a wild pitch to make it 5-4.

However, the Bears scored their final three runs in the top of the seventh. Houston County’s Dalton Carricker opened the inning with an infield single.

The first Bears seventh inning run came in on a bases loaded walk and the other two scored on errors.

The Bears took a 1-0 lead in the top of the third. Taylor Simons tripled in a singling Garrett Kline.

The Bearcats pushed across a run in the bottom of the fourth to tie it up 1-1. Greg Lee’s single up the middle drove in catcher Drew Kelley who reached base on a fielder’s choice and stole second.

Fifth inning RBI singles by Kline and Simons put the Bears back on top 3-1. A two-run home run over the right center field wall by Carricker later in the inning made it 5-1.