Rice was a Bearcat football great 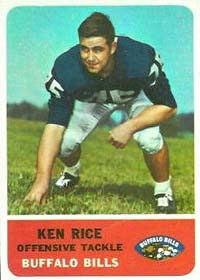 KEN RICE will be inducted into the first class of the Decatur County Sports Hall of Fame.

Editor’s Note: The following story is the second in a four-part series about the four men who will be the first inductees into the Decatur County Sports Hall of Fame Saturday, Feb. 26, at the Charles H. Kirbo Regional Center.

Ken Rice, a former Bainbridge High School football player in the 1950s, went on to star for Auburn University and had a long NFL career.

Rice a two-time All-American offensive tackle for the Auburn University Tigers under Coach Ralph Jordan. In high school, he was an outstanding two-way performer, playing tackle on offense and running back on defense, under former BHS head football coach Spencer “Onion” Davis, another inductee into the Decatur County Sports Hall of Fame.

Rice was named to the conference’s All-Sophomore team as a tackle in 1958 despite playing behind All-Southeastern Conference selection Cleve Webster. A first-round draft choice, he went on to earn All-Pro honors as a rookie with the American Football League Buffalo Bills. He also played with the Miami Dolphins and Oakland Raiders.

The award given each year to the outstanding Auburn offensive lineman carries Rice’s name.

During Auburn’s march to the 2010 Bowl Championship Series (BCS) college football national championship, Rice was honored at halftime of the Oct. 23 game between Auburn and the Louisiana State University Tigers at Auburn’s Jordan Haire Stadium.

He received the 2010 Walter Gilbert Award, the highest award the Auburn athletic department gives to former athletes. It is given annually in memory of Gilbert, an Auburn’s three-time All-America center, who went on to become vice president of Texaco’s European Oil Operations.

Following his professional football career, Rice began a career as a contractor and developer, eventually creating Kenneth E. Rice Construction Company where he is president and CEO.

He has been a major civic contributor to numerous organizations and remains actively involved in the community of Big Canoe, Ga., where he currently resides with his wife, Billie Ann.