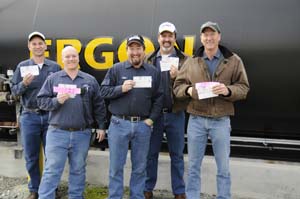 Five of the nine Ergon employees who can say they are a part of Daytona International Speedway’s historic repaving project will get to go to the big race next Sunday.

And with all the accolades associated with the project, Ergon gave each of the Bainbridge terminal’s nine employees two tickets each to the 2011 Daytona 500. Along with those tickets, which are located at the Old Field section that is on Turn 4, came an equal number of “Fan Zone” passes that allow the holder to tour the infield area, observe inside the garages, walk along the pit stalls and even sign their name on the start-finish line.

The four who decided not to attend the 53rd running of the Daytona 500 gave their tickets and passes to their colleagues or family members.

None of the five who are going—Greg Burch, Shannon Hall, Johnny Wacaser, John Crews or Mitch Comerford—are NASCAR fans, have ever attended a NASCAR race, nor even watched much of it on TV. And none of them, of course, have ever attended the running of NASCAR’s première race.

But as Burch said, perhaps after next Sunday’s season-opening race at Daytona’s superspeedway, where speeds are kept below 200 miles per hour by putting restrictor plates on the cars, they just might become fans.

Comerford, who has a chunk of the old track pavement in his office and who tested each batch of the asphalt, said, “I’m looking forward it to for just the experience.”

Comerford is taking his 15-year-old son, Edward; his wife, and his wife’s aunt’s boyfriend, who will serve as a tour guide of sorts, because he’s been to other NASCAR tracks and is a fan.

“I’m exciting about it,” Comerford said.

The other four are too, they said.

The Bainbridge terminal was chosen to supply Ergon’s PG82-22 asphalt mixture to Daytona International Speedway because it was the closest plant of Ergon’s to the project. The contractor of the repaving project, Lane Construction, used one of Ergon’s mixtures when it repaved Talladega in 2006, said Kyle Cook of Ergon corporate office.

Cook said Talladega’s repaving project was also successful, but Daytona’s is making more of a splash; one, because it is the Daytona 500, and also because last year’s Daytona 500 was red-flagged several times because the old pavement was coming up.

The new pavement is also creating a bit of a buzz, even with the drivers, because they say the new surface has more grip, it will allow them to go three-cars-wide driving into the turns and will help the cars go even faster.

“It’s definitely a new day, and the paving job is as beautiful and perfect as it could be,” Carl Edwards, who drives the No. 99 Ford, said in media reports following testing of the new surface in December. Each driver was given a chunk of the old pavement that was removed down to the original 52-year-old lime rock base.

Cook said Ergon provided the tickets and passes to the Bainbridge office as a reward to the employees for the extra time and effort that went into the special asphalt’s preparation and manufacturing.

By the time the contractor mixed Ergon’s PG82-22 asphalt with another component, NASCAR officials say approximately 50,000 tons of asphalt were used to repave the 2.5-mile, 30-degree steep-banked track.

Ergon’s PG82-22 is a polymer-modified asphalt that has a surface memory, which is said to have an elevated softening point. The PG82-22’s memory is also supposed to keep ruts and grooves from forming.