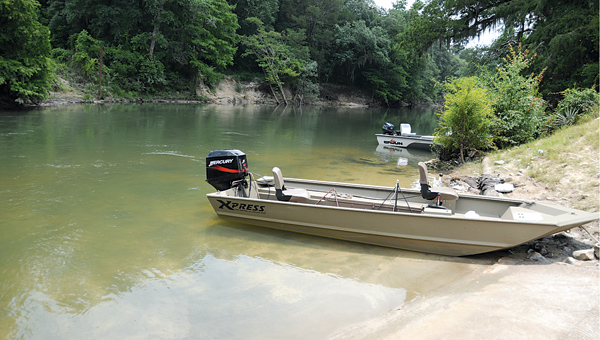 SPRING CREEK has a high diversity of mussels, as many as 14 species, that were recorded in one survey. Two federally listed mussel species, the shinyrayed pocketbook and oval pigtoe, are among the mussels in Spring Creek. However, the Fish and Wildlife Service said the impact of groundwater pumping on streamflow is significantly greater in the Spring Creek watershed because the Floridian Aquifer has a more direct hydraulic connection to the creek.

Water withdrawals from Spring Creek are under scrutiny, and a federal official is hoping federal and state officials can work on a sustainable plan before a third party takes the issue to court.

The Fish and Wildlife Service of the U.S. Department of Interior has advised the Georgia Environmental Protection Division since 2006 to work with the Service in developing a permit that would protect endangered mussel species in Spring Creek and allow agricultural water withdrawals.

In letters dated in January 2006 and December 2008, as well as several meetings and discussions up until one in December 2010, Sandra S. Tucker, field supervisor with the Fish and Wildlife Service in Athens, Ga., says “EPD has not done anything.”

“We got the water planning process on-going, but there’s not been any direct intervention to do anything different,” Tucker said Tuesday.

The Georgia General Assembly was to have acted on the statewide water plan this session, but Sen. John Bulloch, R-Ochlocknee, said the Environmental Protection Division didn’t meet its timeline and has postponed the final plan to where the legislators will likely address it in 2012.

“I think most everybody agreed we were rushing things too much,” Bulloch said in December of the statewide water plan.

In the 2006 letter that outlined the Fish and Wildlife Service’s concern with Spring Creek, Tucker wrote “Currently, there are streams in the Flint River Basin that provide habitat for listed mussels. The populations continue to dwindle; the drought exacerbated the declines but the data presented in the draft plan indicate that the current level of agricultural water withdrawals made the drought significantly deeper.”

The letter continued that allowing even more withdrawals where mussels populations occur will hasten the decline of the species, at which time the Endangered Species Act (ESA) would require explicit authorization.

“Because of the magnitude of flow deviations from natural flows, those ongoing and projected, it is our recommendation that, prior to implementation of the Flint River Water Development and Conservation Plan, EPD acquire the appropriate permit from the Service. To do otherwise places EPD and those implementing the plan at peril for violation of the ESA,” Tucker wrote in 2006.

“A measure not used was a provision of the Flint River Drought Protection Act to reduce irrigation withdrawals by 20 percent in sub-basins with greatest risk of experiencing low flows due to irrigation. This tool could have been utilized to keep flow in Spring Creek and other parts of the Flint River Basin.”

Unlike the conflicts among the stakeholders of the Apalachicola, Flint and Chattahoochee rivers, Spring Creek’s concerns can be boiled down to a more narrow conflict between agricultural and environmental concerns.

“More acutely, we have a conflict with what a stream’s needs and all the little critters’ needs, and what are agriculture’s needs,” Tucker said.

Tucker explained Tuesday that her office acts as technical advisers to parties when activities may or may not go counter to that of the Endangered Species Act, and they are advocates for the nation’s fish and wildlife resources. Additionally, that the Fish and Wildlife Service is trying to fend off third parties who look at federal law and then like to take to task those that may appear to be violating the Endangered Species Act.

As she said, what would be a shame is if the EPD, agricultural and environmental interests and the Fish and Wildlife Service cannot come up with a solution, and “our destiny is controlled by someone else,” such as a judge.

Tucker said the goal of the Fish and Wildlife Service is not to harm agriculture’s ability to irrigate crops or “in no way to take food out of people’s mouths.”