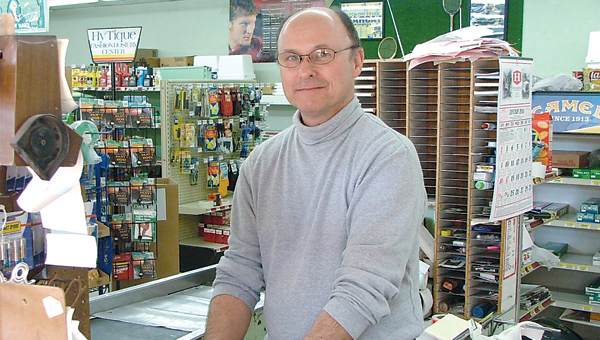 Three or so years ago, The Post-Searchlight published that an individual had obtained an occupational tax certificate to operate Henderson’s Grocery.

A follow-up contact with owner Bob Henderson made us aware that he had not sold the grocery and he would let us know when he had something to tell us.

Bob Henderson is a man of his word. This week he called and told us he is quitting the grocery business. The sign on the door tells customers the doors will close on Feb. 1.

Henderson’s Grocery has been a fixture of the South West Street neighborhood for 49 years, as well as a large part of Henderson’s life.

The business has offered full-service to its customers over the years, including allowing people to charge their groceries, and having groceries delivered to their homes. Henderson said when his father was running the store, people took care of all of their business there. For example, if a customer had a unit go out in their oven, he would order a new part, then go to the home to install it.

“I was raised in here, played in here and worked in here. This store has been my life,” he said. Then he corrects himself by adding, “The people have been my life.” 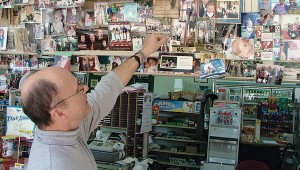 REMEMBERING CUSTOMERS SERVED over the years, Bob Henderson reviews the many photos hung over the cash register area.|Carolyn Iamon

He describes the store as a meeting place, and the many pictures of customers, their children and grandchildren displayed over the cash register testify to roles they have played in the life of the grocery over the years.

“I will miss it, but am very excited over a new chapter in my life,” he continues.

That new chapter includes going to work for Edward Reynolds at Bainbridge Pharmacy, and continuing to drive his school bus route.

When asked what he will be doing at the pharmacy, he replies, “Whatever Edward wants me to do.” He anticipates he will be working in the medical equipment part of the business, but whatever it is, he is ready to do it. 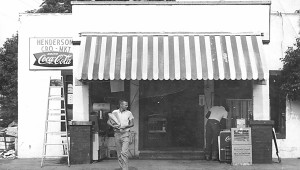 THE FIRST GROCERY BUILDING, originally called Griffins Grocery on the corner of West and Louise streets.

Henderson relates a bit of history of the business. Originally, the grocery building sat right on the corner and a house owned by Anna Grace Griffin sat next door where the current grocery building is today. He said they always called it Griffins Grocery until his daddy, Tab Henderson, purchased it in 1962. He built on to it a couple of times, then in 1967 built the new building and added on to it after two years. 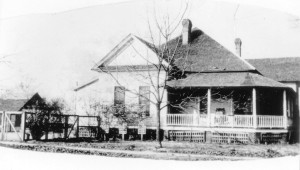 THE GRIFFIN HOME, owned by Anna Grace Griffin, once stood on the place where the Henderson Grocery stands today.

Henderson bought the business from his father in 1982, and has operated it ever since, with the good help of his wife, Carol, whom he refers to as not only his right arm, but also his left.

“We will miss it, but we are excited over our new adventure. I’m tired of being the boss man,” he says, then adds, “We have been involved with the Reynolds family for many years.” Bainbridge natives will recognize the name of Anna Grace Griffin as the mother of Sug Reynolds, mother of Edward.

Henderson concludes by saying, over the last three years he has talked to many people who have shown interest in buying the business, but nothing has come together. He closed the store for four days over Thanksgiving and took the family to Disney World. He realized then that it was time for a change. He considers he and his family are blessed in every way. He is at peace with his decision, and looking toward the future.