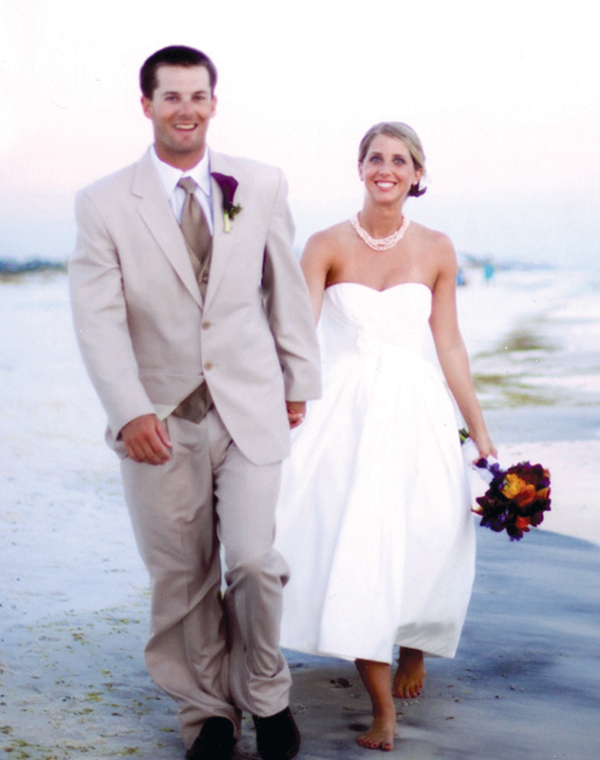 The ceremony was performed by the grandfather of the groom, Dr. Albert L. Reese Jr.

The bride, who was given in marriage by her father, wore a strapless faille gown of white that featured a draped sweetheart bodice. She carried a bouquet with purple calla lilies, tropiciana roses and yellow gerber daisies.

The groom chose his father, Brown Moseley, to be his best man. Ushers were Reese Moseley, brother of the groom; Chase Ferguson, Brad Hardekopf, Ryan Cabbage and Austin Haynes.

The guests were seated at the beach on white benches adorned with pebbles and white orchids as Dr. Larry Tyson, violinist, provided nuptial music.

The reception, given by the Blasers, was held at Rosemary Beach. Decorations were in purple, green and white, with lanterns strung across the pool and vases of flowers and candles lined the pool and gazebo area.

The wedding cake was a traditional four-tiered cake trimmed with delicate pearls. Fresh orchids and calla lilies decorated the tables.

Following a wedding trip to St. Thomas and the U.S. Virgin Islands, the couple is at home in Atlanta, where he is employed as the men’s golf coach at Kennesaw State University. The new Mrs. Moseley is an event coordinator with Marriott’s Waverly Renaissance Hotel.